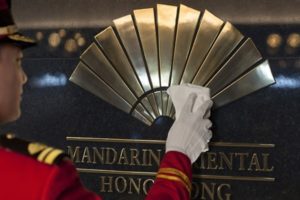 Luxury is attention to detail

Some luxury hotels, and their key personnel, go on forever. Take Giovanni Valenti, above, legendary Florentine concierge ambassador of Mandarin Oriental Hong Kong. He joined the hotel in 1979 and some top travel advisors, and guests, from all corners of the round world would say he is the icon of the (1963-vintage) hotel. He heads a team of 72 in all. There are doormen and bellmen in smart scarlet gear, all of whom seem to have been at the Mandarin for, well, quite a long time, and all seem to call the gal by name, and welcome her back even though it is four years since her last overnight stay. 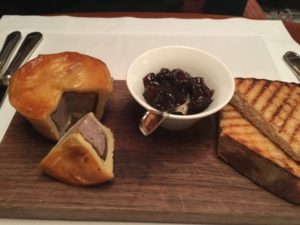 This time offered the opportunity to try British Food, sic, in Chinnery. I say British with reluctance as I think there should be separation between English, Scottish, and Welsh, and that is before Northern Ireland is put into the cookpot. Chinnery is a nook of a gastro-pub, a secret until you find it, with its ceiling-high wall of bottles, and leather seating in booths that are great for clandestine meetings or off-the-record conversations. It is named for George Chinnery, 1774-1852, London-born artist who worked extensively in first India and then Macau, where he is buried in the Old Protestant Cemetery (he visited Hong Kong for six months in 1846. 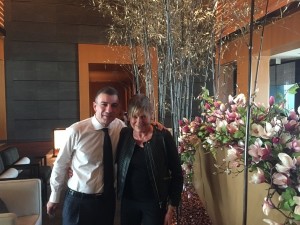 He would have approved of the pork pie starter that Tony Costa chose off the Chinnery menu – it was, properly, served with Branston pickle, first made in Burton upon Trent’s Branston area in 1922 (by Crosse & Blackwell), and also sourdough toast. He would also have approved of my British beef, which turned out to be a robust Scottish ribeye. Desserts include such obvious Brit favourites as bread and butter pudding, apple crumble, and crème caramel. Chinnery would not have been able, in his day, to taste our Pinot Noir, a 2011 Dme Serence Evenstad Reserve from Oregon’s Reserve Willamette Valley – he would have gone for a hearty home-brewed ale in a convex-sided pewter tankard. 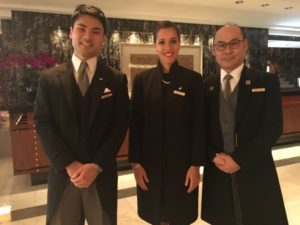 Farewell from a trio of concierges

Tony Costa belies my earlier statement that Mandarin Oriental Hong Kong is an eternal luxury hotel. This GM arrived 73 days ago, and although he is still learning the ropes of this 501-room classic he knows Hong Kong well from the days he opened, and ran, its younger sibling, Landmark Mandarin Oriental. He initiated so much there, and subsequently at Mandarin Oriental Tokyo, and now he takes starring role on this important Hong Kong stage. As I leave, some of Giovanni Valenti’s team come around from behind their long desk to say goodbye: nearby, locals are already coming in for Sunday brunch in the Clipper Lounge, sitting at low tables elegantly set with crisply starched pulled-thread linen mats (others are upstairs in casually modern Café Causette, perhaps enjoying a slice of Esterhazy cake with a cup of Mozart Café, double espresso with whipped cream and sherry brandy, part of a promotion with Vienna’s Café Central and Julius Meinl coffeehouse). WATCH THE VIDEO BELOW, as 71,672 have already done.