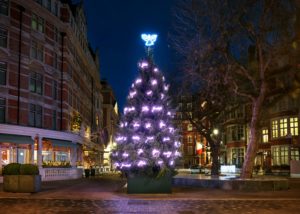 Tracey Emin for The Connaught

Today’s the day to cut down those festive trees. If anyone has their Christmas decorations up after this it is bad luck – apparently some used to believe that tree spirits sheltered in the greenery and they had to be chased away. The gal did a brisk walk round parts of London to see how luxury hotels were making sure they had got rid of invisible spirits. The tree outside The Connaught was taken down three days ago. Continuing a tradition started by Damien Hirst, followed by Sir Antony Gormley, the hotel’s outdoor tree this year was by another English artist, Tracey Emin. 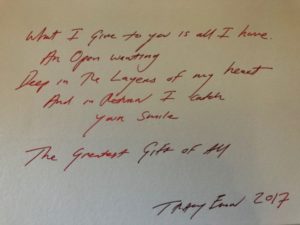 This is a very versatile lady, by the way – her illuminated fuchsia dayglo sign “I loved you more than I can love”  adorns a wall of Hix at The Albemarle at Brown’s Hotel, London. The Connaught GM Max Binda says she threw herself with full Emin vigour into designing his hotel’s tree, and also wrote a poem that he used as its Christmas card. ” What I give to you is all I have, An open wanting, Deep in the layers of my heart, And in return I catch your smile, The greatest gift of all’. I asked Max Binda who on earth could follow this, for Christmas 2018, and his immediate answer was that he was now, after all the Christmas and New Year festivities, going on holiday. Perhaps inspiration will come while he is on a beach in Thailand. 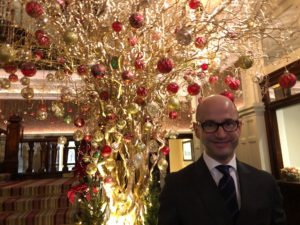 Max Binda about to pack for his holidays

As well as the Emin tree, of course, The Connaught had decorations, including a more traditional tree, inside. A sibling Maybourne hotel, Claridge’s, is similarly renowned for its designer trees, though internationally-designed, and set inside, in the hotel lobby. This year’s tree, at the top of this story, was by Karl Lagerfeld (surely it is not true he is quoted as saying he hates Christmas?). Decorated according to designs drawn by the polymath who somehow also finds time to create his own-label couture, plus Chanel, and help such hotels as Rosewood Le Crillon in Paris, and Sofitel So in Singapore, the fake tree was installed November 22nd, 2017. 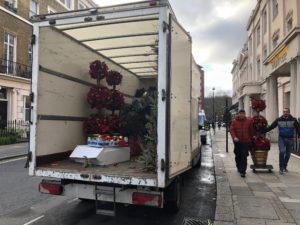 How have the mighty, in the form of Christmas decorations, fallen

Lagerfeld’s legacy, although a pop-up, still therefore had a pretty long run, with plenty of time for literally hundreds of passers-by to come in and see it before it was taken down on January 3rd, 2018. It is almost as if January 6th, which is Twelfth Night and the start of Epiphany, is like the end of a marathon. Reach that point and everything is finished and cleaned up. While I was walking through London’s Belgravia I spied various trees and decorations being removed, all looking the worse for wear. Outside floral specialist Neill Strain, in West Halkin Street next to Mosimann’s Club, bits were being put in an anonymous van – Neill Strain’s luxury hotel clients include nearby Jumeirah Carlton Tower.