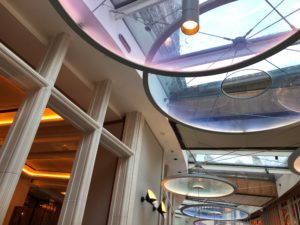 Looking up, in Jean-Georges at The Connaught

Absolutely the most sensational taste that the gal has experienced this year (yes, all right, it IS only January 5th but still…) is Anshu Anghotra’s burrata with lemon jam, shown above. Anghotra is the head culinarian at Jean-Georges at The Connaught, and this luxury London hotel is to be congratulated on opening this fabulous all-day restaurant. In the five months since it opened a new and delighted clientele has been drawn to it, for the food, the service – and the décor. John Heah has created a stylish year-round conservatory, with upper-window saffron stained glass that makes it seem sunny even on a grey and blustery January day. Overhead swirl giant wheels of lucite. 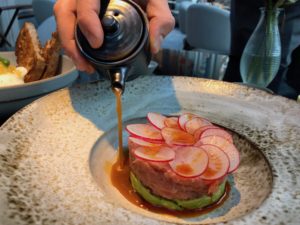 Black marble tables are set with ceramics and white china, and David Mellor cutlery and silver mills – and home made breads come in a silver panier. The all-day menu is one of those that is easy to see, and difficult to choose from as I, perosnally, was tempted by nearly everything. We decided to have a tasting of starters. As well as the burrata, we began with tuna tartare atop avocado, which brought back such happy memories of Prime 7 onboard Navigator last week, but here the tartare, with a ceiling of radish, is finely mashed rather than chopped. We went on to tastings of grilled octopus, and also salmon sushi on top of crispy rice fingers. 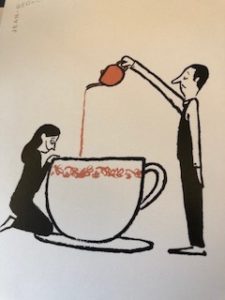 It is amazing that this is Jean-Georges Vongerichten’s only London restaurant – he did once have a Spice Market. When setting up here in The Connaught he apparently came over three times in the six months before its August 2017 opening and he guided Anshu Anghotra (who came from The Lanesborough, and before that Marriott London Park Lane) in the fine details of Vongerichten style. Another name worth mentioning here is that of Jean Jullien, the London-based French cartoonist who has done all the restaurant’s collateral – every one of the menus makes you smile, and the fact he has also designed the paper coffee cups-to-go helps local marketing of the place. 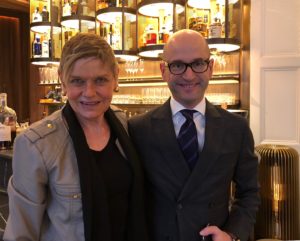 Max Binda, GM of this luxury hotel, says that since Jean-Georges at The Connaught took over this space, covers have doubled and average check has, despite sensible pricing, gone up nicely. I asked him why it is that Italians and food go together like, say, strawberries and cream, or beluga and Krug. Back home near Lake Maggiore it was a natural fascination, he says. As a teenager he and his mates used to talk food – what 15 year-old Americans or Brits would discuss the finesse of a particular dish, I wonder? Italians just have natural style, and complement that selling point with an Alsatian-born consultant, as here at Jean-Georges Vongerichten at The Connaught, and an English-trained on-the-job chef and you have a winner. You can, by the way, even order the menu’s black truffle and Fontina pizza (on a par with Biscotti’s heavenly truffle pizza in Bangkok) to go, or to your room, which is a very good reason for actually staying at the hotel. SEE THE CANDY FLOSS DESSERT AT JEAN-GEORGES AT THE CONNAUGHT, BELOW