Wow, a couple of days between trips (what are luxury hotels? the gal has momentarily forgotten).  I am still in London, but sadly just missed the first planting of The Dorchester’s first planting of 80 trees that it will plant to celebrate its 80th birthday.

In London, I avoid taxis (too slow). One way to travel is by limousine (Baglioni, the best-known Italian luxury hotel in town, has switched its Maserati town car to a Jaguar, which is somewhat hilarious in that the reading matter in its seatback pockets includes Coffee Table, the glossy magazine of  Taj Hotels, Resorts & Palaces, owner of JLR Jaguar Land Rover).

Another way, if you have no gear, is by bicycle, especially one of the ‘Boris bikes’, the pick-up-and-go borrow-it bikes that are called after keen cyclist Boris Johnson, the hay-haired Mayor of London. 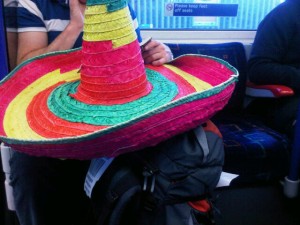 Hat on a hot-seat tube

The B should actually stand for Barclay’s, the bank that sponsors the system and has its colour and logo all over the machines, but Boris comes first, as he invariably does.

There is also the tube, or subway-underground, the quickest way of getting from Heathrow to the Piccadilly area.  This guy opposite me was coming back from Mexico, with a gift for his mum.  I suggested he wear it.  He said it tickled.

Best way of getting around in London is actually by foot.  I walked past the Royal

Academy in Piccadilly and there, in the courtyard, is an extraordinary tower modelled on the grotesque thing that Anish Kapoor is designing for the London Olympics next year.

(Kapoor’s ArcelorMittal Orbit, at 115 metres high, is being mostly paid for by Mittal magnate Lakshmi Mittal, who is stumping up £16 million – the remaining £3.1 million is supposed to come from the Greater London Authority, perhaps from bicycle rentals?) 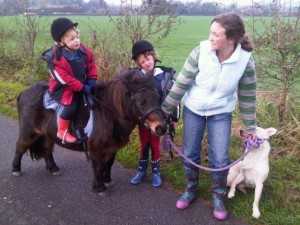 Thank goodness, I am now out of London and home in the country, where other forms of transport abide.  No, not everyone travels by horse, or even miniature pony.

It is designer David Collins who says, in Tanya Rose’s lovely book Travel Secrets, that he cites nice luggage, neatly packed, as essential to the luxury travel experience.

Well of course my brand-new Rimowa wheelie is all ready to go…  Whither shall the gal wander next?