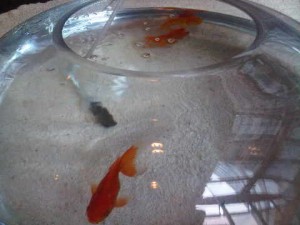 These goldfish have just checked into InterContinental Hong Kong

There is nothing better, during a mammoth conference, than escaping for a bit of physical workout.  The gym at Hotel InterContinental Hong Kong is one of those 24-hour affairs and it gets ten out of ten, not only for equipment but for its space, and its people.

There are two adjacent rooms, one looking into greenery, the other into the pool approach, with its four-foot-high scarlet candles that are illuminated from within, once it gets dark.

The gal, because of the conference work load, was in the gym before dawn, together with two really top hoteliers, Jim Petrus of Trump and Jan Smits of IHG. 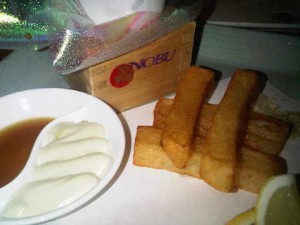 She also managed to escape (shush, do not tell the organisers) to the hotel’s blissful iSpa, for a stress-relieving back massage.  Thirty minutes was as good as an hour.

As I left, newly-arrived fish were swimming round in a circular bowl. It was fish, in the form of fish and chips, at Nobu the previous night.  This hotel has so many eating places and all are not only good but packed.

There is Chinese, of course, and the Steakhouse where Ivanka rushed to yesterday.  There is buffet at Harbour View.  There is one of the ten best club lounges in the world, with juices squeezed to order and pumpernickel and seaweed breads that create a new haute standard.

And, if that is not enough, there is a SPOON by Alain Ducasse and the aforementioned Nobu.  Gosh I love Nobu, equalled only by MEGU in New York and, in Lima, Mesa 18 by Nobu’s good friend Konishi Tomoru.  My normal Nobu dish is his black cod. His fish and chips, with the former in a Nobu box and the latter piled as bricks, is pretty sensational, too. 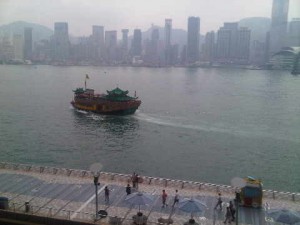 From Nobu, look out through all-wall windows across the harbour to Hong Kong Island. The continuous water traffic still includes a couple of traditional junks, for tourists.

Those who knew this place 49 years ago remember lots of water, and the brand-new Mandarin Hotel across on the island, with the cross-harbour Star Ferry terminal in front.  Now so much new land has been created you think you could almost leap across the harbour.

The Star Ferry terminal has been relocated. What is now The Mandarin Oriental Hotel, celebrating its 50th birthday next year, is now surrounded by sky-high sculptures that most hold mega-banks. 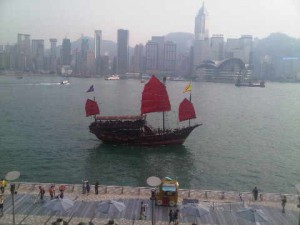 .. from traditional junks (for tourists) ...

Last Thursday the hotel marked the opening of its Piaget store (in the ground floor space that was its café) by turning the two-floor lobby into one giant ballroom.

It was themed for the Yves Piaget Rose, a deep pink hybrid rose, Rosa Yves Piaget, developed 1985 – also known as the Queen Adelaide.  Hotel  columns were covered up and a new carpet was put down, just for the evening.

Shades of Sir Philip Green’s party at Rosewood Mayakoba earlier this year, though that one went on for three nights and cost more than the annual budget of Andorra. This one-evening affair was paid for by Piaget’s owner Richemont, and by breakfast the next morning all was, apparently, back to normal. 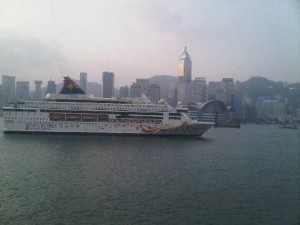 ..to cruise ships, for gamblers

Every evening in Hong Kong is a celebration.  At eight p.m. precisely giant laser shows sparkle and twinkle and light the skies up, above the Central skyscrapers on the Island, and above Tsimshatsui’s buildings on the mainland (for the whole of October, the façade of the 28-floor Peninsula Hong Kong is pink, in honour of breast cancer awareness).

Absolutely the best place for watching the cross-harbour show, which goes on for 13 minutes, is from one of the restaurants, or your harbour-facing room at the lovely, stylish, wish-it-were-home luxury hotel that is InterContinental Hong Kong.

All the while, too, from any of these venues you can see the water traffic plying too and fro, from Star Ferries to junks, and dredgers and tugs and barges stacked high with full-size containers, and the daily Star Cruise ship taking gamers out to sea to lose their bottom dollars. 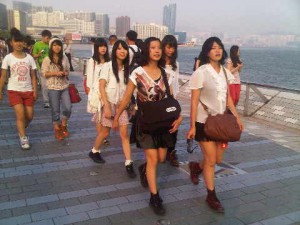 Busloads of mainland tourists pour on to Avenue of Stars, below room 318...

Immediately below my room, 318, I could look down at the boardwalk that is built around the hotel. It has been branded as Avenue of Stars, with local heroes’ hand prints set into concrete.

Goodness only knows how many visitors come here daily.  It is on the circuit for Mainland Chinese day-trips. You can see up to 20 buses parked just east of where the old New World Hotel was – it is now a construction space.

The buses disgorge one guide with a flag and a few dozen tourists wearing distinguishing bright-coloured paper labels.  Apparently 95 percent of such tourists return dissatisfied, says Jens Thraenhart, co-founder of Dragon Trail, which helps companies access the Chinese market. They feel they are being treated as commodities, and everything is not as satisfactory as they had hoped. 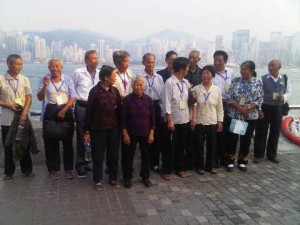 ..to have photographs taken, in groups ...

That is one reason why Jens Thraenhart and his business partner, George Cau, have launched Trip Show, to help the young Chinese affluents, those who have already done a paper label tour, to plan, and enjoy, a more meaningful trip.

These people do not want tours.  They want to know which hotel to choose, and which room to choose (say 318 at InterContinental Hong Kong – which is also, by the way, handy for the gym, pool and spa).

They want to post images of their trips, to share, and they want to see what others have posted.  And they will find that Trip Show’s Luxury Travel Coach will help them negotiate understanding wine lists and foreign art and much more. 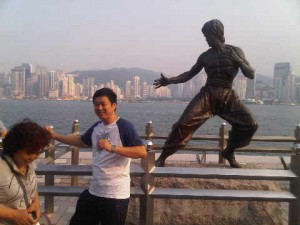 .. or posing by the life-size sculpture of Jackie Chan

Talking of sharing, one of the most-photographed venues in Hong Kong is the statue of Jackie Chan along Avenue of Stars.   Another, for the intelligentsia, will surely be the InterCon’s new ‘table’, the installation art that shows that lifestyle needs, and appreciates, uniqueness.  Wonder who is leaning on the table today?