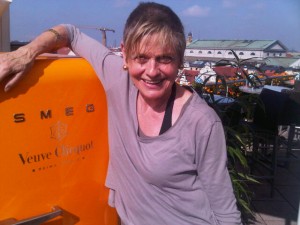 The Smeg, in Veuve Clicquot orange, holds plenty of Champagne

The combination of hot sun in a clear blue sky, and a Munich rooftop and lots of champagne and a retro Smeg refrigerator … what a luxury lunch for any young girl.

I was at China Moon, the summer-only outdoor restaurant atop the seven-floor Mandarin Oriental Munich.  Up there, look around you at all the mega-cranes.  Yes, Munich is doing well.  Its combination of retail and culture, and pharma(ceutical) and medical industries are a draw.  Come here, I am told, for consultations or surgery or whatever. 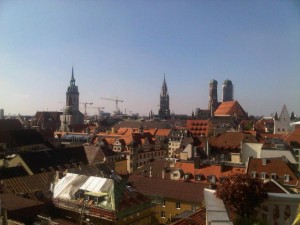 That day I was in town for business, but took time out for lunch at Mandarin Oriental.  Up on the rooftop, every bright orange chaise-longue seemed to be taken.  Ashtrays are orange too, as is the icebox. Veuve Clicquot, part of the mighty LVMH stable, is not only the Champagne here but it is the only, and very prominent, sponsor.

Lars Wagner, the ultra-creative GM of the hotel, showed me the heavy wicker Sylter Strandkorb sofas (beach lounge chairs, for two) that he had made on Sylt, the holiday island off north Germany.   We lunch off Arabic mezze and Caesar salad, but could have had anything Asian, as the name China Moon implies. 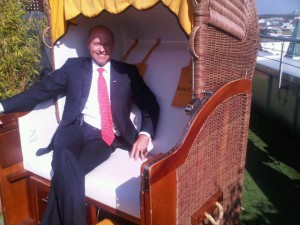 Lars shows one of his heavy wicker canopied sofas, from Sylt

There all kinds of interesting people around, but I could not have recognized anyone and would not mention them even if I had – this is a hotel for discretion, although it is well known by their followers and the football community worldwide that Manchester City stayed here for their match against Bayern Munich last week.  They must have enjoyed the rooftop restaurant and lounge, and the adjacent infinity pool that is, apparently, boarded over for New Year’s Eve dancing.

Oh by the way, put China Moon in your forward planning for 2012, like end of April… until then, it takes a seasonal holiday, to be replaced from mid-November 2012 by the winter-long Alm wood hut. Specially made by a professional alpine hut constructor, it  holds up to 60. 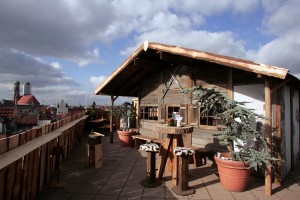 What the Alm Hut will look like, on the Mandarin Oriental Munich rooftop

There is a Krug Champagne Room inside (yes, supporting yet another LVMH brand) and it is already booked out for private parties most week nights through the end of December.  Weekends, fortunately, are first come, first served.

Want to stay overnight?  I last stayed in 504, a corner room with salon occupying a 270-degree ‘tower’ space, for dining for you and five friends – ideal before you head off to the Alm hut.