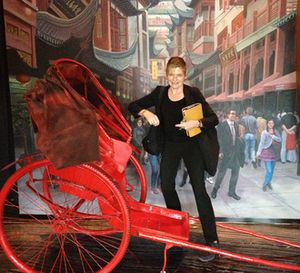 Was that how she arrived?

Sometimes, the gal admits, she is recommended something so strongly that she can hardly believe exaggeration is not part of the story.  Her friends Keith Barr, now in London, and Bruce Ryde, now in Singapore, were going on and on about Hotel Indigo Shanghai on the Bund that she began to ask herself if this was a luxury lifestyle hotel, a dream or invention.  Well, I finally made it (coming on from another sensational IHG-group hotel, the restored InterContinental Shanghai Ruijin Hotel, but that is another story). And to paraphrase and twist Julius Caesar, I came, I saw and I was totally conquered. 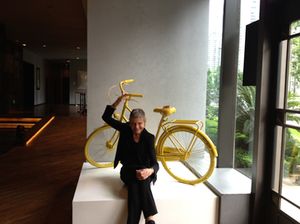 A really old building, right on the water (as opposed to across the road from it) at the northern end of The Bund  was just outside the Baodaimen gate of the old city wall, by Shiliu Pu (Pier 16) of what, during the 1821-1850 era, had been the focal point of Shanghai’s ship trade. Then it had been a branch of Shanghai Bank.  Then the owners, the local government, thought ah, a hotel! They found themselves in the hands of true creators, Messrs Barr and Ryde and a professional designer called Andrew Moore. Put a rickshaw in the lobby, they thought.  They did.  Make the whole lobby into a vision of Shanghai.  They did – hence the old bicycle, hence a mammoth rock down which real water flows, a reminder of the river outside. 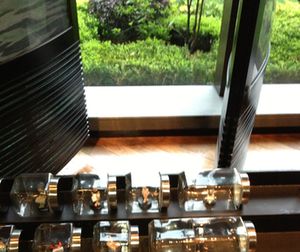 This area of the city was shipbuilding, so an entire wall is formed of real rusty steel plates from vessels of years back. Right opposite, in front of a window that looks out to a garden with enormous anchor chains, are dozens of 12-inch long preserving jars, set as if keys on a qwerty board.

Each jar holds a miniature figure absorbed in a device. Is communication breaking down in family life in today’s China? 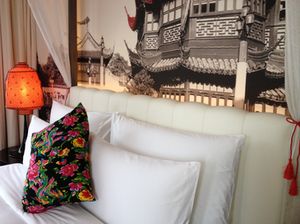 Constantly-changing modern art in the lobby brings in newness, and attracts bloggers galore. Hong Huang,  Mao’s secretary’s daughter raved about the entire hotel, and its range of teas, to her two million followers. Bet Ms-Mao-blogger did not rave as much as I did about the beds.  They are inspired.  Each has a bedhead formed of a blown-up photo of old Shanghai, and one bedside light is an orange lantern, one is a turquoise lantern.  The desk chair is curved-hardwood painted apple green, with a multi-coloured cushion that matches the bright primary colours of the rug on the hardwood floor. The tiles in the shower are tiny Shanghai-blue, the toiletries are local BaYanKaLa, including a face mask. Up on the top three floors, 28-30, of the building is a multi-story evening entertainment area, with CHAR steakhouse, and ageing room, on 28, then a bar and, top floor, CHAR private, a look-like-private gentlemen’s club with the private dinings that Chinese love – they call them PDRs, work that one out. 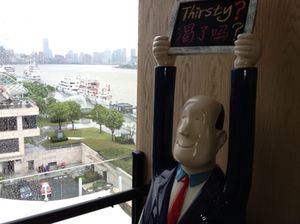 Look out, from Quay, along the entire Bund

This whole place is lots of fun. On the sixth floor the whole space flows around from lounge area, with masses of biggest-size upright Macs ready for anyone’s use, and massage chairs, and library areas, and boutique areas, and the restaurant, Quay.  This gives a sensational view along The Bund, a mile and a half along to The Peninsula. There are ‘pods’ inside the restaurant, for kids to watch television or for lovers to drink champagne. 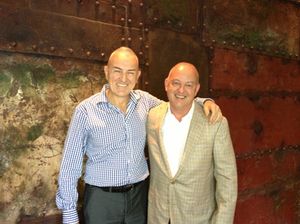 The food is comfort, from noodles to fish and chips. The chef, Julie Donohoe, does sensational chips, I had’em by themselves, with a salad. And afterwards, when it was time to leave this fun-luxury lifestyle hotel, I took a final picture – in front of the wall of rusted ship panels –  of Bruce Ryde, who made it all happen, and of Christoph Zbinden, who is now in charge.