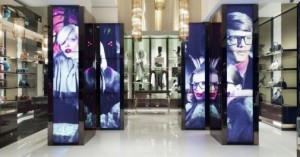 This girl only flies Economy for shorthaul, that is to say flights under four hours maximum, preferably shorter. I had not flown Air France in years and I must admit I was pleasantly surprised, at least by the actual in-the-air experience.

All flight announcements are given in French first and then faultless English – on a Paris-Casablanca flight I would have expected Arabic rather than English.For some reason I had pre-ordered vegetarian (had not really expected any food at all on a 2.5-hour flight). I won the toss on this one.

The outbound flight lunch was really not bad. Coming back I did brilliantly: my ‘breakfast’ had lots of marinated veggies while my neighbours struggled with too-cold croissants and bread rolls, one of each per person. My perfect airline food would actually be what Hyatt Regency Casablanca laid on for our conference cocktail a couple of nights ago, namely a surfeit both of foie gras and sashimi-sushi, on separate meat-only and seafood-only buffets.  But that went with the backdrop of the floodlit outdoor pool, an open bar, lots of friends and space to walk around. 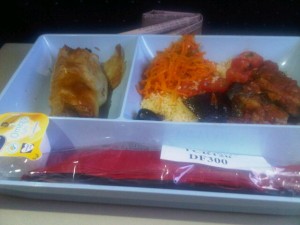 I am also pleasantly surprised by the regular Roissy Bus between Paris-Opera and Roissy-Charles de Gaulle. It is one of those double-length buses, runs about every 12 minutes and is just as speedy as a taxi as both my drivers appeared to be practising for Formula One.  It is only ten euros, one way (easy to pay, by Visa), and every little helps towards the next pair of Louboutin shoes or the ice-blue Armani strapless dress that is my overall favourite of last week’s Milan Fashion Week.

Wish I had also been in Milan for the unveiling of Gucci’s new GIRE, which stands for Gucci Immersive Retail Experience. Fifty giant LCD video walls, in Gucci’s Via Montenapoleone store, create lifesize interactive images, to make you more part-of-the-scene.  I will be there soon as I can – meanwhile, see what Oliver Petcu has to say on cpp-luxury.com 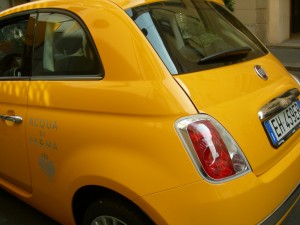 I will stay just round the corner, at Four Seasons Hotel Milano, Milan’s luxury hotel on via Gesu.  Last visit there I was in the unique Brioni Suite (number 301), a pinkish-grey haven with hints of purple – loved the La Prairie toiletries, with the choice to pay extra for so-Italian pampering lotions from Speziali Laurentiani, in Pisa.

One morning, going out into via Gesu for my morning run to Giardini Pubblici Indro Montanelli, I saw Acqua di Parma’s town car outside its shop opposite. Just what a girl needs to get around town.  It would certainly also stand out in the carpark after a match at Silvio Berlusconi’s AC Milan.