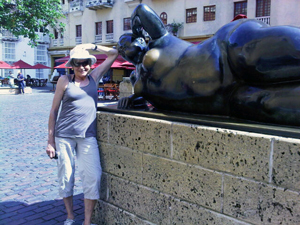 Time to go and see a real Botero, gal.  There is a very famous one here in Cartagena de Indias, Colombia – a lifesize prone nude, a chubby bronze depicted the way only the Medellin-born sculptor Fernando Botero can do.  So many thousands have rubbed her buttocks they are quite shiny.

Riding around the walled Old Town (Ciudad Amurallada, walled city) is a sight every second. The walls, in part 20 or more feet high and in places 30 feet wide, were built 1605-1805 with big limestone blocks from quarries 20 minutes away.

Inside the walls, streets are narrow enough barely to allow two carts to pass but now there are sidewalks for the many tourists drawn to what is undoubtedly the most authentic Colonial Spanish town anywhere. 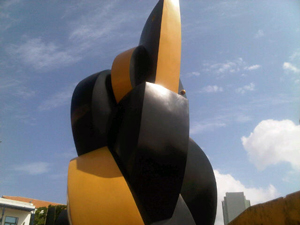 The carriage routes are therefore one way, and slow, the speed governed by the plod-plod of the carriage in front.

Multi-storey houses either side traditionally had shops at street level, and owners lived upstairs: second floors generally have cantilevered wood terraces, with sides enclosed.  The most impressive house today belongs to one of the richest Colombian, telecoms giant Carlos Ardiles Lula. 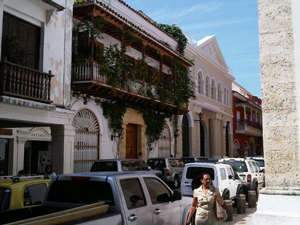 We pass the Palace of the Inquisition, and the cathedral, in Plaza de Bolivár, and sure enough there is a statue of Simón Bolivár in the square in front.

Elsewhere, there is a statue of Pedro de Heredia, founder of Cartagena.  And dotted all around the town is a temporary display of modern sculptures by Sofia Vari, wife of Fernando Botero.

Across the street from the fabulous Sofitel Santa Clara is the home of Nobel laureate Gabriel García Márquez, author of Love in the Time of Cholera and so many other works. 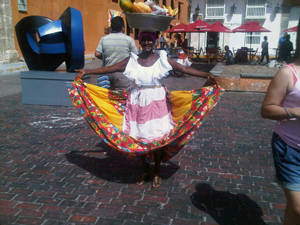 Fruit-seller in traditional gear (another Sofia Vari behind)

This is a literary town: the seventh annual Hay Literary Festival, sponsored for the second year running by the UK’s Daily Telegraph (owned by the Barclay brothers, who also own that luxury hotel The Ritz London) will be held January 26-29, 2012, with such guests as Jonathan Franzen, Carlos Fuentes, Michael Nyman, Ben Okri, David Safier and Marcus du Sautoy,  www.hayfestival.org/Cartagena. But it has other events too: the annual Classic Music Festival runs January 6-12, 2012, www.cartagenamusicfestival.com, and the International Film Festival is February 23-29, 2012, www.ficci.com

At all times, many find time here for shopping, for the boutiques here are colourful and bearing high-quality, must-have items.  There are frocks by Silvia Tcherassi, who has her own luxury boutique hotel, Tcherassi Hotel & Spa.  Her relation Vicky Tcherassi, a shoe designer, also has a shop. 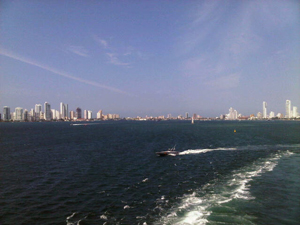 Looking back at the Cartagena skyline

Some of the other designer boutiques include Cartagena-born Beatriz Camacho, the jewellery of Cuanto Te Cuiero and leisure wear at Colombian brand Color Siete. The best guide for a quick insight into luxury Cartagena is Cartagena Lure, cleverly compiled by Roberto Clausell Low and his team.

But we had no time to shop.  It was back to Silver Cloud, gal, to sail on to Fort Lauderdale and yet more luxury hotels.