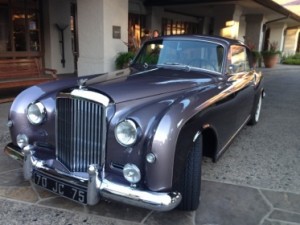 1950 vintage, outside the front door

The Pebble Beach complex, on the Monterey Bay coast, was home to the 2014 two-yearly gathering of the Preferred Hotel Group. It also hosts, every January, a major Wine & Food Festival, and in August the annual Grande Concours of classic and vintage cars (during that time, the gal is told, only cars worth $500,000 or above are allowed near the complex’s luxury hotels’ entrances). This November, a 1950-vintage beauty, in shades of raspberry mousse, had come to visit. It went beautifully with the snow-white hair of its driver who, judging by his body language, was probably also its owner. 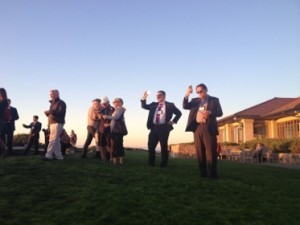 Year-round, The Inn at Spanish Bay, the Pebble Beach hotel where the Preferred group met, has a sunset piper, just like the six o’clock piping ritual at Turnberry in Scotland, the links-set hotel on which the Inn at Spanish Bay was modelled – yes, The Inn at Spanish Bay similarly has a 72-par links, sandy wasteland, course, designed by Robert Trent Jones Jr, Tom Watson and Sandy Tatum. After he finished his first round, Tom Watson is said to have declared ‘This is so much like Scotland I can almost hear the bagpipes playing’. Ergo, every sunset, a piper emerges from the dunes, coming from the west so impossible to photograph. 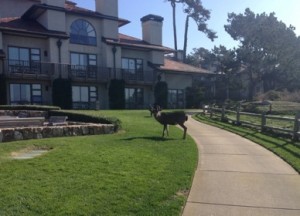 It was amusing, anyway, to see so many of the Preferred delegates rising from seats around the many blazing firepits on the hotel’s terrace to take photographs of the piper. This place is certainly nature at its best, by the way. At least three deer consider the entire complex of The Inn at Spanish Bay as their personal territory. Heading back from the gym, in the sports club six minutes’ walk from the main hotel, the animals were on the pavement, and showed no fear. Just as I found in the Galapagos last week, it is as if humans are invisible. I saw them again and again. One day they were on the path right next to where the bagpiper would emerge from the dunes in a few hours’ time. 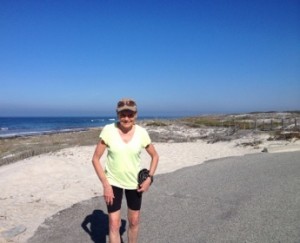 Great exercise along the boardwalk to a carpark

Oh those dunes! Luxury is a hotel that allows the fitness seeker to get natural, as well as gym, workouts. Obviously the dunes themselves are highly protected but the inn at Spanish Bay has thoughtfully laid a boardwalk down through them to the coastline, where you can run, or hike, for half a mile in each direction. Both ends connect to the public 17-Mile Drive, a road constructed in 1892 by the Pacific Improvement Company, a consortium of railroad barons, to enable pleasure-seekers to drive along the coast between Carmel and Monterey. At either end of today’s boardwalk are parking spots, so locals come and walk the walk, with tiny pooches on leads or kids in wellington boots aching to get down on to the actual beach.