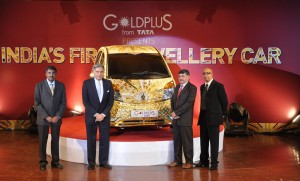 Every gal loves a bit of gold – but a whole car made from it?  Here is Ratan Tata with a one-off Nano, covered in 80 kg of 22-carat gold, plus 15 kg silver and gemstones (an ordinary Nano costs around $2,500 this one is priced at around $4.68 million).  This is the Goldplus Car, unveiled in Mumbai to celebrate 5,000 years of jewellery tradition in India.

Goldplus is the brand of jewellery-crafting that is owned by Titan Industries – which happens, like Land Rover and Jaguar and Range Rover and Taj Hotels, Resorts and Palaces and so many other iconic names – to be part of the entire Tata empire. 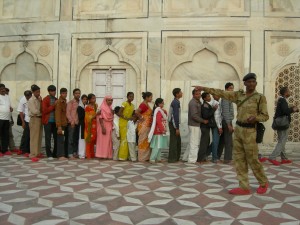 Colour in the line at the Taj Mahal, Agra

This, in turn, is headed by Ratan Tata, a lovely bachelor whom I had the great pleasure and honour to interview some years ago.  They sent a car for me, a golden yellow Ambassador. Goldplus has 29 stores around India and the car will be taken around, for a show-and-tell.

Colour, of course, is everywhere in India. Others try to do it, but often fail. Look at some of the appalling ‘clothes’ featured during the September 2011 London Fashion Week. I did not go, but seeing the images in the media I am glad I was absent. The only exception was Burberry, as stylish and agelessly ‘right’ as always (Burberry creative director Christopher Bailey is not only nice, he is a genius). 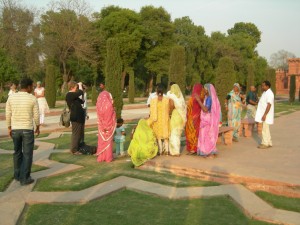 London currently lacks design style, as is evident from the aggressive London 2012 Olympics logo.  Fortunately other places offer more than enough style, as compensation.  The first of the Milan fashion shows featured Frida Giannini’s ‘hard Deco’ styles for Gucci, shown September 22, 2011. She used masses of black and, that magic, gold, my own favourite colour combination. 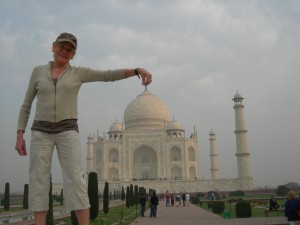 Work out this photo at Taj Mahal Agra...

Back to stylish – and Incredible – India. At the ‘real’ Taj Mahal I was blown away by the bright saris of some of the visitors (I myself was more subdued, that day).  At the other ‘Taj Mahal’, the luxury Taj Mahal Palace hotel in Mumbai, I last stayed, immediately before its official re-opening, in suite 443, a lovely confection of mousse-like colours (a blackcurrant-mousse foyer, and the salon and bedroom were raspberry- and coffee-mousse.

My breakfast yoghurt came in a china pot, marked yoghurt.  It is little details that make the difference.