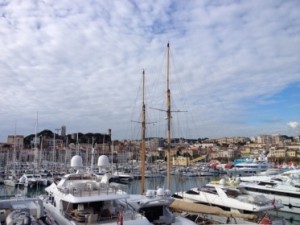 After a day of pouring rain, the sun that everyone expects in Cannes reappeared, and from the Palais des Congrès, home of the annual ILTM, gathering of all the best luxury hotels, ships and airlines and more, the gal could look across the harbour. ILTM is actually the saving grace of Cannes at this time of year. The summer season has long gone, and any Russians who are still around – though they have been much fewer in number this year – are probably holed up in their own apartments. New Year will be a big splash, but nothing else big happens until the spring. So welcome, the 1,461 exhibitors from 95 countries, and welcome the 1,452 travel advisors whom they willl meet at pre-arranged 20-minute appointments. 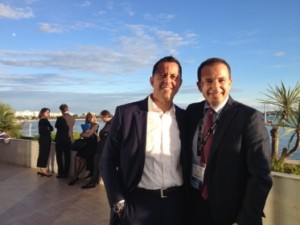 Taking a break between meetings

Many ‘exhibitors’ have more than one person manning a stand – Ritz-Carlton had 72, for instance. Add over 70 super-media and you are going to end up with a total headcount of well over 4,000 ‘foreign bodies’ making Cannes their temporary home. Some exhibitors like Nira Hotels & Resorts, and Silversea Cruises, chose stands right next to big terraces, which were great for entertaining, and in between meetings old friends, or at least friends of many years, would continue networking. Yes, anyone who is anyone in the world of luxury travel has to be here. 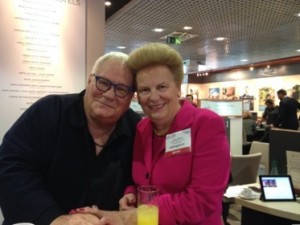 The doyennes of  luxury travel advisors have to be here too, names of the calibre of Mollie Fitzgerald, who, from her Pennsylvania base, sends people heli-fishing in Siberia, or whatever, and the justifiably-legendary  Valerie Wilson. Virtuoso was here in a big way – Chairman Matthew Upchurch announced Virtuoso’s arrival in Europe, with 16 luxury travel agencies signed up. On the hotel consortia side, Preferred probably took top spot, not only because three of the owning Ueberroth family were high profile throughout but their stand, in the middle of three floors, gets the most passing traffic (that having been said, Relais, up on the top conservatory-like floor, has the best all-day eating and drinking). 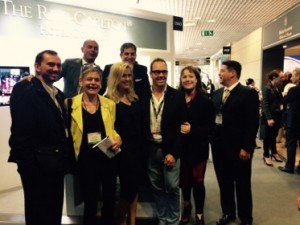 The Dorchester Collection hosted afternoon tea on their stand, but I did not see any tea, only Champagne. Every luxury hotel group found a slot to host something unique – Lebua held a cocktail at the Carlton InterContinental, and Taj, cleverly, booked the new beach spot opposite the Majestic Barrière (very spacious, very warm and with a highly-talented canapé chef). Oh yes, and Ritz-Carlton cleverly organised a mass tweet, be on their stand at a particular hour or else…