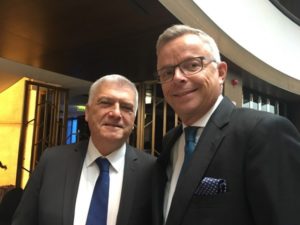 It is really exciting, says the gal, to experience a new annual conference that seems, in its very first year, to be running so smoothly that many would think it had been around for ever (the same can be said about hotels, which is one reason why Four Seasons and other groups of luxury hotels make sure they have everything running like a well-tuned Bolshoi before they allow their first paying guests in over the gilded threshhold). HOTCO: the first Hotel Investment Conference for Central and Eastern Europe and the Caucasus, was held January 30-31, 2017, at the lovely luxury Kempinski Hotel Corvinus Budapest. As the organisers, Horwath HTL’s Marius Gomola, MD of the company’s Hungary office, and his colleague Liliane Otsuka sent out 24 hours before the start, it was full house, and yes, there were 364 delegates. 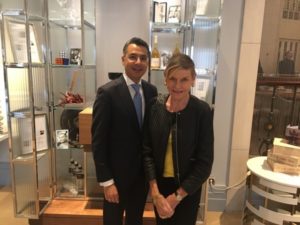 In fact 365 took part – Adele Gutman Milne, above, attended via Skype from New York. As VP Sales, Marketing & Revenue Library Hotel Collection, she was on a high. Library Hotel Collection’s The Aria, here in Budapest, has just been awarded Tripadvisor’s Best Hotel in the World, 2017, in its people’s choice listings.  She stressed to her panel, and the audience, that she spends nothing on traditional marketing. Instead, she invests her budget in customer enhancements and thus, she says, she generally raises customer appreciation. Library Hotel Collection’s founding President, Henry Kallan was here at HOTCO: at one session he was recognisable by his green trousers and suitably-fireside cardigan. Oh what a beautiful place Budapest is. Dubai magnate Khalaf Al Habtoor was first brought here by his tennis coach. Now he loves the city so much he owns both InterContinental Budapest and Ritz-Carlton Budapest, and he flew in this week with a retinue of at least 30 to give the keynote speech. Despite the fact that his large hotel portfolio includes not only the Waldorf Astoria on Jumeriah The Palm and the Habtoor City resorts back in Dubai, plus the gorgeous The Imperial Vienna, a Luxury Collection hotel, he feels that, compared to Budapest the rest of Europe is crippled. 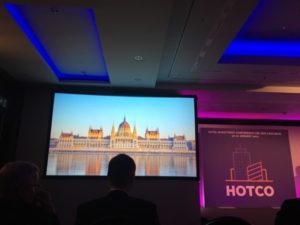 Looking back at this hugely successful HOTCO there were so many outstanding speeches. CEO of Vienna House, Rupert Simoner, said Austria’s hospitality is his company’s differentiator, Tophotel Projects’ CEO Rolf Schmidt said that of over 6,000 worldwide projects his company is monitoring, 241 are in this area, Euromonitor’s Cosmin Dan pointed out only one percent of overall lodging value here is currently going to Airbnb, and Marcin Herra, Co-Owner of UEFA Euro 2012 Poland, warned Budapest, in the running for the 2024 Olympics, not to count on one such event to change the whole face of its lodging landscape. Potential new projects introduced in a Project Showcase included a 160-room W Prague, proposed by the eminent house of Julius Meinl. 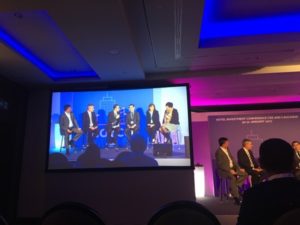 …and we could easily see all speakers

Deutsche Hospitality CEO Puneet Chhatwal separately announced a 300-room IntercityHotel Budapest, to be designed by Matteo Thun. On that very day, AccorHotels, led by Sébastien Bazin – not here, sadly, as he always enlivens any good event even more – announced it is buying Sofitel Budapest Chain Bridge, the open-atrium hotel that was formerly Hyatt (Sofitel has 14 hotels in total, throughout Hungary). At HOTCO Marriott was there in strength, led by its head of Europe, Amy McPherson, and it was hinted that one of the many reasons Marriott needed Starwood was for Starwood’s strong Croatian presence.

It was, overall, a really useful and serious conference with lots of time for splendid networking. Horwath’s Jamie Chappell, as emcee, kept the whole thing rolling at a galloping pace, and Kempinski Hotel Corvinus Budapest showed how well a luxury hotel can host an industry event – and its GM Stephan Interthal seemed so omnipresent I wondered if he had several stand-ins. Now we just have to find out the 2018 date.