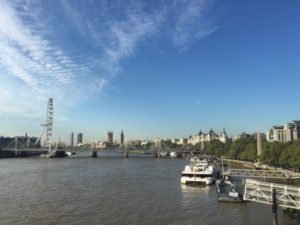 The Thames (the boat on the right)

Here we are, 21 and younger every day. This is Debbie Flynn, one of the arbiters of the best luxury hotels of the world, cutting the birthday cake to celebrate the coming of age of her communications company, London-based Brighter PR – the invitations said wear brighter-than-usual, but the gal for some reason did not know the dress code so looked more funereal than most there. Debbie formerly headed the promotions team for British Airways (you know, those two chic flight attendants, in their neat forage caps, standing at the foot of the stairs of a 747 the other day as Team GB Olympic athletes paraded down on their return from Rio). 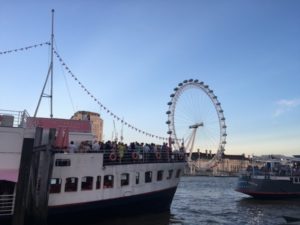 What is British? The Royal Family, of course, plus British Airways, and the River Thames, site of the annual Oxford and Cambridge Boat Race – see the video below. It is not surprising that for her party Debbie Flynn chose to party on the river, on the RS Hispaniola, which is moored beside London’s Victoria Embankment, three minutes’ walk from Corinthia London. Today it is a party boat. It never actually sails but you do certainly feel some swell, the whole time. What a fascinating history it has. It was launched February 17th, 1953, having cost the then-considerable sum of £145,000, and up until May 1971 it operated as the Maid of Ashton. The first passenger ship in Scotland to have radar, she did the Clyde-Holy Loch run, operated by the Caledonian Steam Packet Company, but with the growth of car ferries she lost business. 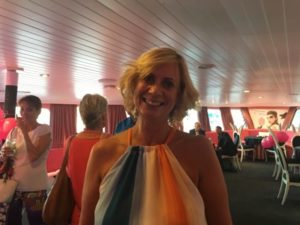 On the 21st birthday

She was renamed, for some reason, after the second-largest island in the Caribbean and today she is owned by City Cruises. She is ideal for parties, with two big inside cabins and two upper decks. For her party, Debbie Flynn and the Brighter team went all-out, with a selfie bar, lots of bright Brighter cushions and, not surprisingly, plenty of potables. Her own Brighter cocktail was a blend of destinations the company represents, rum for the Caribbean, soda water for UK, maple syrup sweetener for Canada, a mint sprig for Jordan and lots of ice, for ever-so-trendy Iceland. There were over 150 there that evening, top media, the great and good of the UK travel industry and, of course, a sprinkling of hoteliers. Yes, Debbie Flynn is one of those admired professionals who truly understands the value of luxury. Now see the video below, of the gruelling 2016 Oxford vs. Cambridge boat race