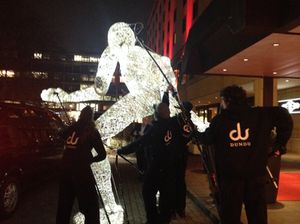 Welcome to the Steigenberger Berlin…

Other luxury hotels in Berlin also threw memorable parties during last week’s exhausting but must-be-there ITB global tourism fair, says the gal.  Those lucky enough to be invited to Steigenberger’s annual Küchenparty, Kitchen Party, were greeted by 12-foot illuminated puppets, each limb on a stick worked by a separate operator. This was fun, and the puppeteers were really skilful.  Guests were greeted at Steigenberger Hotel Berlin by hosts Puneet Chhatwal, CEO of Steigenberger, and his COO, Michel Novatin, and it was great to see the Steigenberger group’s owners, the absolutely charming Hamed El Chiaty and his wife (the most beautifully-dressed woman at the event), Dora El Chiaty, who oversees design. 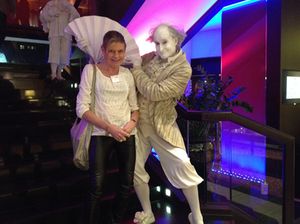 .. and who is this other guest? 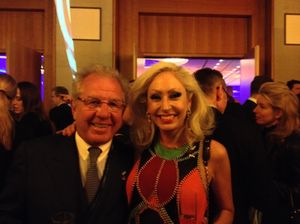 Another evening, Radisson Blu Berlin was the venue for Rezidor’s African Extravaganza, and of course Kurt and Lara Ritter were highlights.  Lara Ritter even managed to find an African-look Missoni dress. How do you manage it? I asked.  I have never seen this wonder-woman in the same dress twice.  Simple, she replied. She makes a note of who might have seen what.  That is fine but I bet she travels round the world with more than one small Porsche Rimowa wheelie…  This party was to celebrate Rezidor, and its parent Carlson Rezidor, in Africa. There are already 53 hotels, both Radisson Blus and Park Inns by Rezidor, throughout Africa, and it has an absolutely huge list of properties to come, known technically as ‘pipeline’. A third of these future hotels in Africa will be Park Inns by Radisson – hope they are all as much worthwhile fun as the Park Inn at Heathrow, which has five multi-painted Mini Coopers for local dashing around. 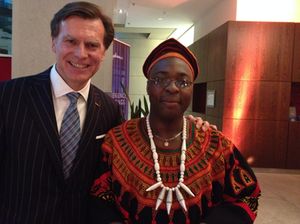 Official host of the Rezidor party was Kurt Ritter’s successor as President and CEO, Wolfgang Neumann, who has his own personal African souvenir.  A few months ago he climbed Kilimanjaro, raising $35,000 for charity in the process.  Good for you, Wolfgang.  We talked about gyms, and the time we both worked out together in his previous life. It was at the luxury Cavalieri – a Waldorf Astoria hotel in Rome, and they opened the gym specially early for us.  Ah, says Wolfgang Neumann tonight, the best gym in the whole of the African continent is in one of our hotels, Radisson Blu at Sandton, Johannesburg.  I must try and get there.