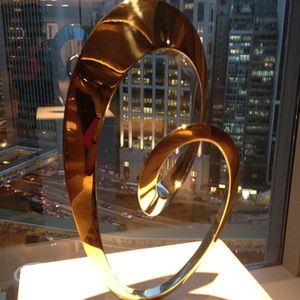 Some luxury hotels just get better and better – it always helps if they have passionate owners, and owners’ representatives (sometimes called asset managers) who understand the need to maintain and improve quality rather than merely trying to make money, and, a vital ingredient, a General Manager who is not only super-efficient but ultra creative.  All these ingredients are found, says the gal, at Four Seasons Hotel Hong Kong, a massive complex that opened at Hong Kong’s International Finance Centre in 2005. It has been owned from the start by a partnership that includes both Henderson Land and Sun Hung Kai, both of whom have the necessary deep pockets. 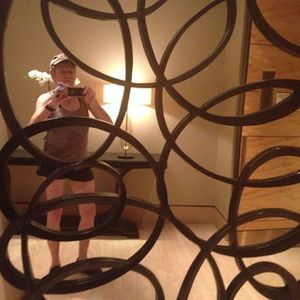 Scroll on a wall

The very-English General Manager, William Mackay – with whom I empathise as we both have three younger siblings – is as enthusiastic as he was eight years ago.  If anything he has to be even more efficient these days as regular guests, over 55 percent of them from Asia, now want to make bookings and concierge-type requests with him and him alone.

And he has become even more creative along the way (I have to have a project at any one time, he says).  In 2012 he added a really sexy bar, designed by Spin, to Caprice, one of his two restaurants to have three, yes THREE, Michelin stars – the other is his Chinese restaurant, Lung King Heen. 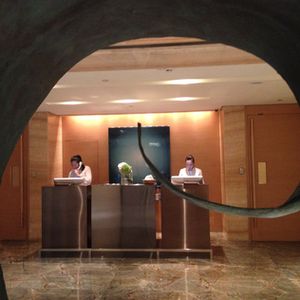 Scroll-framed entrance to the spa

In 2013 he is working on what he says will be Hong Kong’s first luxury nail bar. Imagine sitting there waiting for your toenails to dry, perhaps a glass of Champagne in hand, and looking out across the harbour to Kowloon (and the world’s tallest hotel, Ritz-Carlton Hong Kong, which is completely owned by Sun Hung Kai).

He already has one of the most popular spas, 17 rooms and women in chic-fitting cream trouser suits. Girlahead recovered from the week-that-was with a blissful Biologique Recherche Methodology facial – thank you, Anna. 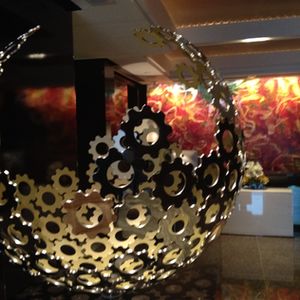 Looking through to the entrance of the Four Seasons club lounge..

William Mackay has, by the way, a really pretty hotel, thanks to a line-up of designers who also include Bilkey Llinas, KCA, Wilson Associates and Yabu Pushelberg.  One of these came up with lots of scrolls, in the form of freestanding sculptures, and mirrors by elevator lobbies, and at the entrance to the spa. Outside the 45th-floor Club Lounge stands what could be taken for a globe formed of silver cut-outs.  Look through this to the bank of big-sized Apple computers used by the lovely club agents: behind is a collage that says colour. The club lounge opens at seven on weekend mornings. No problem (I was leaving at seven). It will be open early.  By 6.30am there were three chic people around (perfectly fitting trouser suits, but black). There were also three other guests, probably leaving for early flights. 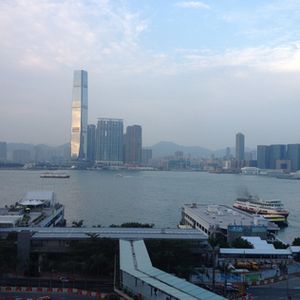 And the view – across to the sky-high Ritz-Carlton

I was struck yet again by the high standard of club lounges throughout Asia. They are often pay-for rather than automatic-with-room, but by this entrance method they can be used as upgrade.

At Four Seasons Hong Kong of course the club lounge has copious fruits and breads and a chef who cooks the perfect omelette, and yes, you also have that view.

One little extra; they obviously thought I had not eaten enough. As I got into the car to take me on, I was handed a bag with drink, nuts and a note that wished me well, from the Room Service team. 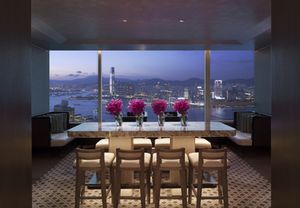 A similar view from The Conrad’s new club lounge(s)

One last point on views from club lounges in Hong Kong’s luxury hotels. I have already raved, and will do so again, about Club Continental across the harbour in Kowloon. I was also impressed by the brand-new club lounge at Conrad Hong Kong, in Wanchai. Here the 59th floor club lounge, redesigned by GM Thomas Hoeborn – a real foodie, by the way – has one main entrance, and then two mirror-image lounges to give a more friendly feel.  Both have walk-in kitchens, with dual wall-set ovens from which you can help yourself to just-baked croissants through to quiche, and afternoon tea scones (to go with clotted cream and home-made jams) and evening savouries. They even provide oven gloves to avoid hand-burn. And, from that height, of course they also provide a view back across the harbour…