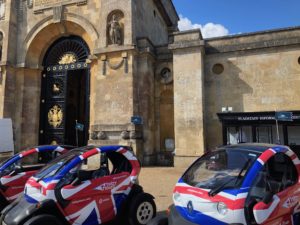 Outside a main entrance

Putting monochrome artworks into multi-coloured antique surroundings is – totally brilliant, says the gal.  This could be the next big trend for luxury hotels when it comes to differentiation. Which will be the first to dare to do such a pop-up?  Now until October 18th, 2018, Blenheim Palace is showing just how effective it can be. Blenheim Palace, north of Oxford, is England’s only non-royal palace (England does not ‘do’ the French thing of designating even new buildings as palatial). It was finished 1722, and named for the 1704 Battle of Blenheim, and was a reward for John Churchill, 1st Duke of Marlborough, for his military victories against both the French and the Spanish. 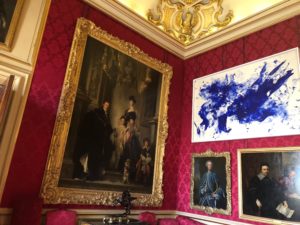 Today it is home of the current Duke of Marlborough, who fortunately has enough space to be able to welcome tourists. Over a million a year come, and I arrived with, I think, a significant fraction of the population of China. Never mind, they were busily buying in the superb Gift Shop, taking selfies and gazing at the dedicated Churchill exhibition.   I managed to slide past the crowds to the rooms where the Klein pieces, over 50 of them, are brilliantly displayed.  Most are sculptures, but there is one painting that fascinates, ‘Jonathan Swift’, painted about 1960 . 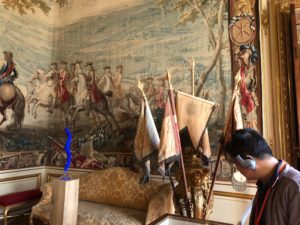 IKB coordinates splendidly with traditional antiques (and a Chinese tourist)

Yves Klein, 1928-62, studied marine science and oriental languages, but he had two extra-curricular interests.  One was judo, the other painting – his parents were both artists, but it was Arman (Armand Fernandez) who encouraged him to paint. In 1947, Klein, Arman and artist Claude Pascale, lying on a Riviera beach, divided up ‘life’. Arman took earth, Pascal chose words, and Klein chose space. This led to his experimenting with painting in sky blue which turned into blue which turned into International Klein Blue (IKB). Developed with Montparnasse paint supplier Edouard Adam, this is an ultramarine pigment, the colour suspended from a matte, synthetic resin, a polyvinyl acetate, Rhodopas M (M60A) from Rhône-Poulenc (today, the Adam store sells the resin as Médium Adam 25). 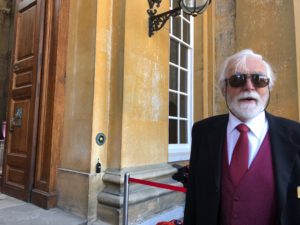 Actor Eddie Redmayne, although he is colour-blind, wrote his thesis on IKB, which is patented, when studying History of Art at Trinity College, Cambridge. IKB is fascinating, especially for big-business collectors – the highest price made at auction was $22 million, for a 1959 sculpture of natural sea sponges drenched in IKB.  Klein’s widow, Rotraut Klein-Moquay, 90, lives in Phoenix AZ: The Estate of Yves Klein is held by ADAGP in London and Paris (DACS). How incredibly fortunate that the Blenheim Art Foundation, started by Lord Edward Spencer Churchill in 2014, has been able to organise this Klein retrospective to celebrate what would have been the artist’s 90thbirthday.  Yes, head to the superb show at Blenheim Palace before it closes – it is open daily but, as the characterful doorman, who could grace any great hotel, told me, sorry, not open until 10.30. NOW SEE TWO VIDEOS, FIRST OF THE MAIN PALACE COURTYARD, NEXT INSIDE JUST ONE OF THE MANY KLEIN ROOMS