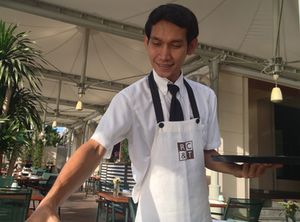 Breakfast coffee, with a smile …

Now is the time to rush to Bangkok. If you are fed up with rude, surly, slow service and hands-out-for-tips, wherever you happen to be, buy a ticket to Bangkok, without delay. Here, service at all luxury hotels seems to be carried out by people with fluid, rather than jointed, bodies. Waiters doing breakfast duty outside at The Peninsula Bangkok give the impression of practising not quite a pas de deux but comings and goings for an impromptu Giselle or Swan Lake. While the gal feels like a robot trying to carry a plate of beautifully cut papaya chunks, with lime of course, out from the air-conditioned buffet to a river-side table at River Café + Terrace, the server who takes it from her glides the rest of the way. 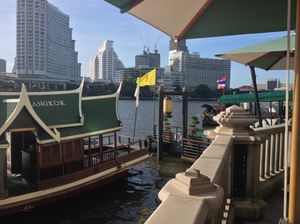 ..sitting right by the river

Oh that river. Breakfasting right next to, rather than overlooking, the Chao Phraya River is one of the reasons many travellers, especially on holiday, stay here, or at another of ‘the river set’ – yes, they might even market themselves as such. Watch the activity, the public and private shuttles going back and forth, and, along the river, longboats rushing tourists to temples, and slow-slow trains of up to four gigantic barges pulled by one tiny tug and one long piece of string. I have another cup of coffee, then take a walk to check out the chef’s herb garden, when you can have a private meal-for-four. 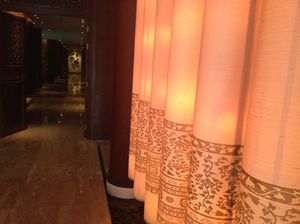 Guard of honour on reaching the spa…

I head to the ESPA, where another immaculately groomed chorus of servers – in this case ladies in brown pyjama suits, their conductor in black, wai me and smile. I am escorted for five minutes along a zigzag sidewalk, looking through a wood grill at a lotus plant-filled klang, narrow canal, on the way to an old three-floor Thai house. This is the spa proper. Inside, on the ground floor, I walk between a guard of honour of wood columns and inner-lit scrolls.   Upstairs, in one of the 14 rooms, I lie down on my back and one of those lovely ladies does the most amazing thing with a Biologique Recherché machine, apparently a device invented by a family of scientists, the Allouches, a biologist, physiotherapist and a doctor. Yes, they are from France. 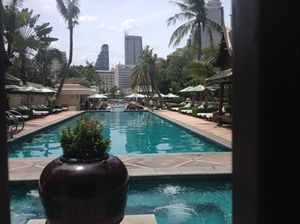 .. and the view on departure

After this has worked wonders on my face, will I look like Carla and get a Bulgari contract? I feel a million dollars. Coming out of the spa, I look through the wood-grill wall, again, this time at the end of the three connecting, end to end, swimming pools. At the far end is the river. No wonder many come here to recover from sightseeing, in Bangkok or elsewhere in Thailand, or elsewhere in south-east Asia come to that. This is an ideal place to relax, and justify eating and drinking by swimming a few lengths – cross-laps are not really meaningful for these pools. 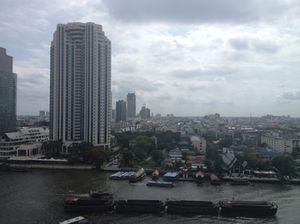 The river has constant traffic

Back up in lovely suite 3004, I admire the new photographs. In ummer 2013 the creative Katja Henke, who runs this hotel, launched a photographic competition to see what best symbolises Bangkok-ness. The five winners won substantial prizes, including some air fares. I have two somewhat Impressionist images on my walls, blending so well with the soft taupe colouring – and contrasting with, outside, the blue of the sky and the olive of the water (this is not a river to swim in!). This is a river to look at, mesmerised nonstop by the flow of traffic upstream and downstream and zigzagging across. 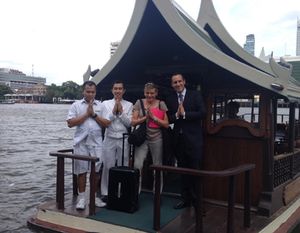 I decided to leave this luxury hotel by boat, which I had not done since the Maldives. Down to The Peninsula landing stage, on to boat, escorted across the river, met the other side, all of two minutes, departure to arrival. This surely wins an award – talking of which I do hope Katja Henke wins an award end of August. She is bravely captaining The Peninsula team in the 13th annual The King’s Cup Elephant Polo Tournament. This year, August 27-31, 2014, it is being held for the first time here in Bangkok, at Siam Polo Park, in the VR Sports Club, near Suvarnabhumi airport. Now if THAT is not an inducement to plan a quick trip to Bangkok, what more could be needed?