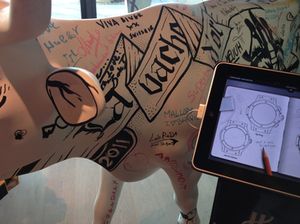 A cow welcomes you to Hublot headquarters

There is a good chance you are in Switzerland when you see a lifesize cow sculpture. Half an hour after leaving the luxury hotel that works so closely with Hublot, Mandarin Oriental Geneva, the gal arrives at the watch brand’s five-floor modern headquarters in Nyon, surrounded by green pastures and distant mountains, with a blue sky overhead.  Hublot has been part of the enormous LVMH conglomerate since 2008, but it is very much its own entity.  Over 300 work here making watches, and another building will open in two years to cope with expansion. 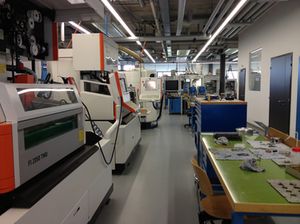 One of the futurist robot-watchmaker rooms

It is just heart-warming how open and welcoming the Hublot people are to ‘experience package’ guests of the hotel. Everyone I passed either said hello and/or gave a firm handshake.  I too, like all of them, was in a white coat, and no-one minded my taking photos.  We started the 2.5-hour tour on the ground floor, looking at mammoth robot-machines that take solid blocks of material, say bronze, and exactly cut and shape and brush and wash and check and check again pieces that are so small, sometimes, the human eye can barely see them.  A typical Hublot watch has well over 300 parts in it, and some have over 750.  For the last two years much more of the component manufacture was brought in house (straps are still outsourced). 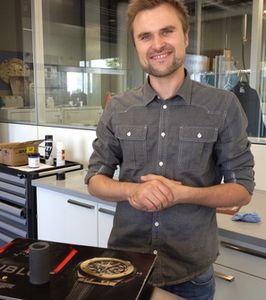 I was blown away by the intricacy of how an initial pencil drawing goes, via computer and trial, into a system that eventually produces an item that could be sold for CHF 250,000 or more.  Innovation comes in the whole time.  I met Senad Hasanovic, who, when working at the Swiss Federal Institute of Technology in Lausanne, was challenged by Hublot’s legendary Chairman, Jean-Claude Biver, to ‘harden’ gold.  Hasanovic, who is now head material engineer here, invented Magic Gold.  Basically, a shape of porous boron carbide ceramic is impregnated with 18-carat gold, in a ratio of 25:75 ceramic:gold.  Magic Gold is terrifically hard, and it is a fabulous grey-gold colour that changes hue depending on the amount of light it gets. Goodness only knows what Hasanovic is working on now.  Since all Hublot watches are water-tight at least to 100 feet, and some to 1,000 feet below the surface, there is no scope there.  Perhaps he is going to come up with an un-stealable watch?  A couple of his colleagues rather pooh-poohed the idea of incorporating an Apple mini-device into watches when I mentioned it. 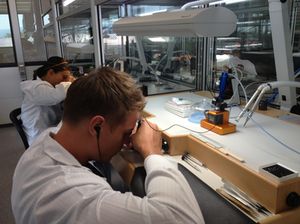 Anyway, after watch pieces have been formed by machine they are then installed.  The technicians always work at the same spot, doing the same task.  Some work in pairs.  They all follow detailed printed instructions, as if they were cooking, meticulous pastry-work rather than more-flexible lasagne.   Some watches are being made entirely by machine – watching those machines, which can work 24/7 rather than the 40-hour week of their human counterparts, is breathtaking as you know every machine, with its dozens of pairs of minute ‘hands’, costs as much as the most expensive finished watch.  Other watches, especially limited edition, are made entirely by hand, from start to finish. 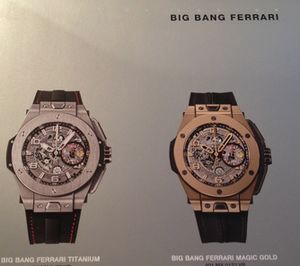 Hublot partners closely with Ferrari, with joint functions when pitstop mechanics are brought in, say, to Dubai, alongside a couple of skilled watchmakers.  Hublot is featured on Ferrari’s F1 cars.  Hublot produces Ferrari limited-edition watches: shown are two Ferrari Big Bang watches, titanium on the left and Magic Gold on the right.  There are also limited edition watches for other partners, say FC Bayern München and another world-class football club to be unveiled next week (coincidentally that club bought 30 Hublots for its players last month). I am not sure if Hublot – yet – does special watches for its partner hotels, W Hotels worldwide and, in Geneva and Paris, Mandarin Oriental. A joint promotion with another LVMH brand, Hennessy, is planned for China shortly.  In South America, the brand is promoted via Hublot’s only female ambassador, Mexican television personality Jacky Bracamontes. 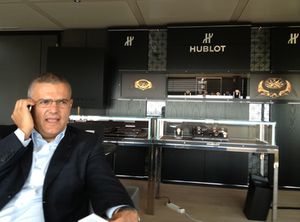 I ask Hublot’s CEO, Ricardo Guadalupe – over water and cheese from his Chairman’s cows – how much the brand can grow without becoming too commonplace.  We can get up to about 50,000 watches a year, he says confidently, without actually revealing how many the company is producing right now.  I actually covet a simple Magic Gold watch, Big Bang or not, but at least I know have a Hublot polo shirt (I have also learned, during this fascinating morning session, how to take a watch exterior to pieces and put it back together again). I go out into the Swiss sunshine, and the limo of a certain luxury hotel swishes me back to the real world.