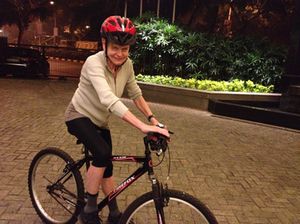 As all GirlAhead followers know, get a bike ready and any luxury hotel goes up in the reputation stakes. The Oberoi Mumbai got bikes because of customer (in industry terms ‘guest’) demand.  Well done, says the gal, for listening to customers, or consumers, or guests or what you will.  Having bikes, and well-maintained bikes, and helmets, and locks and keys, at the ready is a big plus, especially when you are in Mumbai, in Nariman Point, which is absolutely flat, and security is more than ten out of ten. 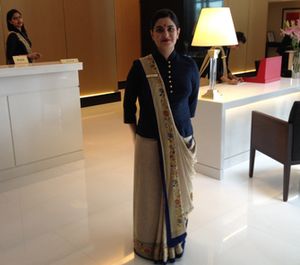 Oberoi saris are so chic, royal blue and gold

Being back here gave me a chance to look at the women around me.  OK, as I have said (I think!) among the Millennials India is 70 percent male, only 30 percent female.  Those women, however, are penetrating the hotel world fast.  I arrived back at the hotel – driven as before by a highly skilled female chauffeur, complete with white peaked cap and white gloves – and was escorted up, from the lower lobby, to the main lobby.  There, there are several dreamy ladies in royal blue and gold saris.  They all look exquisite.  They move like swans, and they anticipate every thing you might want. 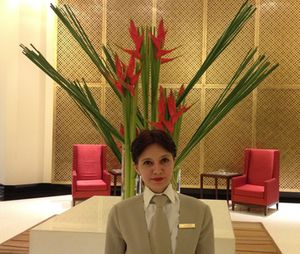 Butler in a fashionable trouser suit that matches the décor

That is the point about Indian service.  Somehow they are schooled to think ‘what might that person want?’).  Some years ago, on Oberoi’s beautiful Zahra river-boat cruiser on the Nile, I hurt my leg a little.  A butler rushed up with a bandaid – I had not even seen the cut – and when I got back onboard, there was a supply of fresh bandaids.  The same thing happened here in Mumbai.  My butler Georgette Hegde – in fashionable gear – somehow knew when I needed her, and she kept away when I did not need her.  Her uniform is a clever palest olive, with lots of gold buttons in front.  When a woman, say a girlahead, is in one of the top suites, she swings into action.  If the occupant is male, a male butler takes over. 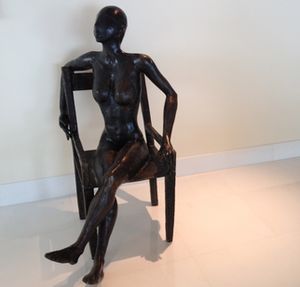 Suite 2063 is named Golconda, for the ruined city 11 km west of Hyderabad whose mines have produced some of the world’s most famous gems, including the Hope Diamond and the Koh-i-Noor (it is also the name of a ‘city’, of some 760 population, in Illinois, USA).  Golconda, the suite, is an airy champagne marble and glass area with a big black grand piano.  Near it sits my suite-mate, a lovely full-size woman, sculpted by Dimpy Menon, who did a similar figure in the suite I had at The Oberoi in New Delhi.  Last week, I am told, another (real) woman in this suite was so offended she demanded the sculpture be covered. 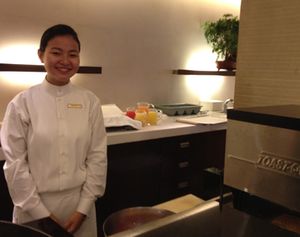 There are, to my mind, stunning women throughout this gracefully calm hotel.  After my bike ride, far along the Back Bay coastal road and past the remains of last night’s outdoor wedding extravaganzas, already being dismantled to be re-erected for tonight’s events of happy couples’ lifetimes, after I was showered and so on, it was breakfast. Last night we dined, superbly and surrounded by local glitterati gourmets, off chef Alessandro’s Italian in Vetro (love his home-flavoured olive oils!).  This morning I go to Fenix.  All servers, male and female, wear chef-type gear, really well-cut white shirts and long white aprons. I am intrigued that the roller-toaster is sensibly put at eye-height rather than typically-low so you have to bend over: and there is a dedicated toaster concierge, whose sole job it is to supervise the machine, and bring your toasted bread – in a linen-lined metal basket, of course. 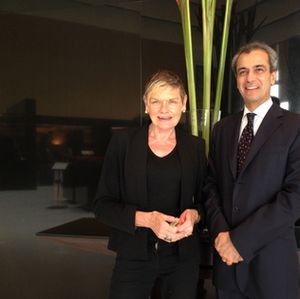 Yes, this is Oberoi.  The Oberoi school of service is legendary, as I had found on the Nile and in so many land-set hotels, throughout India and in Mauritius (now I have to visit the latest luxury hotel, in Dubai). The conductor of this particular orchestra, or the captain of the team here in Mumbai, is Devendra Bharma, a would-be scientist who is cricket-mad.  Next time, I ask, will he come cycling with me, just as long as I do not have to wield a bat in return?