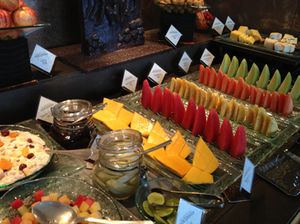 Luxury can be the quality of a breakfast buffet, the type of fruit and so much more.  A buffet that gives cheap and mass fruit, say different kinds of melon and not much else, is not luxury.  And why do breakfast buffets in luxury hotels’ club lounges all too often give second-rate fare compared with what is available downstairs in the main restaurant?  Fairmont’s President’s Club lounges consistently give good breakfast buffets, as do Ritz-Carltons (especially in Singapore, says the gal). And Shangri-La Horizon Club rooms not only come with full office kits, including much-needed pairs of scissors and things, but access to a lounge that gives a decent breakfast. 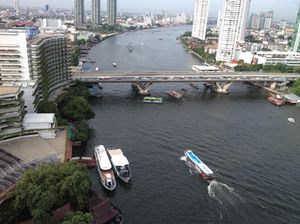 Shangri-La Hotel Bangkok is a veteran that started in 1986 and, like Topsy, has carried on growing and updating ever since (look down on its rooftop, from above, and you see endless banks of solar panels, well done).  Its  24th floor Horizon Club Lounge has amazing views along the Phraya river.  I never get tired of this view, with its criss-cross of hotels’ and public ferries from one bank to the other, and, as if woven in but never colliding, the upstream-downstream ‘trains’ of up to four barges pulling one another. The view from here is actually more or less the same as from the near-neighbour, Mandarin Oriental Bangkok.  In 1986, when this, the first tower of what is now a 850-room hotel, opened as the Oriental, the boss, the legendary Kurt Wachtveitl, felt confident he would keep all his guests. 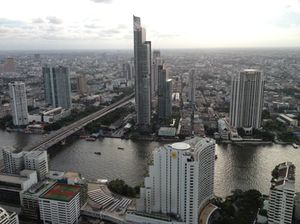 .. and TO the hotel, with its solar panels down to the left of its helicopter pad

Now, as the world knows, there is room for everyone in Bangkok.  Thailand is the perennially attractive tourist destination, up to 22.4 MILLION visitors in 2012 and still rising.  The biggest growth is in Muslims, up 110 percent over 2011, admittedly from a low base.  There is also amazing growth in diversity – the Thai tourist office in the USA is deliberately targeting gays and on Valentine’s Day this year apparently there was a special gay-couple immigration line at Bangkok’s Suvarnabhumi airport.  You certainly see everyone in the top hotels here.  Tonight, in the main ballroom of the Shangri-La, there is an evening of ballroom dancing.  BALLroom dancing?  An informal group meets most Sunday afternoons here during the winter and tonight is their gala evening. Wonder if anyone has ever tangoed around the Horizon Club (it is big enough)? 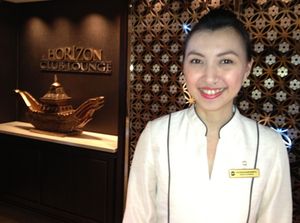 Chatkaew Mahawongwiriya, manager of the club (Horizon rather than ballroom dancing) is recognisable by the conventional V-shaped neckline and long sleeves of her champagne-coloured jacket.  Her female colleagues wear champagne jackets that have a priest-like necklace closure, and short sleeves.  They are all very charming, and remember your likes and dislikes from your last visit.  I have a conversation with the hotel’s boss, Kieran Twomey from Cork, and he says a club lounge is ideal for top business travellers on long trips who, come the evening, either do not want to, or cannot, fraternise with subordinates.  Hang out in the club, watch those boats, watch television, read, and meet like-minded people. 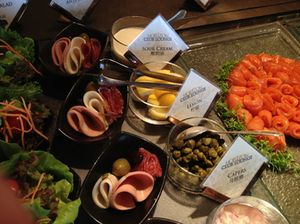 .. or from the buffet display

I wonder how many romances have started in executive clubs. I remember that what is now the club lounge of InterContinental Hong Kong was previously a Shanghai tea lounge with ballroom dancing, so presumably some couples got together there. Today, the 19th floor lounge in the Fairmont Baku, in one of three Flame Towers sitting high on a hill looking down at the Azari parliament, is big enough for dancing in (the lounge, with glass walls, soars up through two floors).  You could waltz, with ease, in the club lounge of Grand Hyatt Hong Kong, on the hotel’s 30th and 31st floors, or you could tango in the St Regis restaurant at Park Tower Buenos Aires – it was formerly the club lounge of what was originally the all-club tower of its conjoined Sheraton. 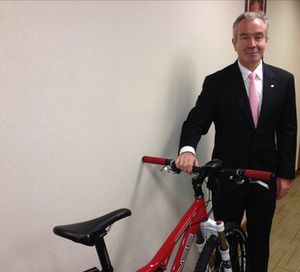 Success of a club lounge comes down to several factors: hardware, including views, and the software of the people in charge.  Add the included offerings, like Ritz-Carlton Millenia Singapore’s resident cartoonist, and what is now expected, in club lounges of luxury hotels worldwide …Real yoghurts, not American custard-types-with-flavours, are industry par, as are cold cuts and proper bread, and fresh juice and access to cooked-for-you hot stuff.  What is not expected – yet – is for happy regulars to show their appreciation by breaking into song and dance, or at least the latter.  And talking of the unexpected, I went to see Kieran Twomey in his office, to find he shares it with his professional dance partner, also known as the sturdy bike that he rides to work each day, through Bangkok’s traffic.