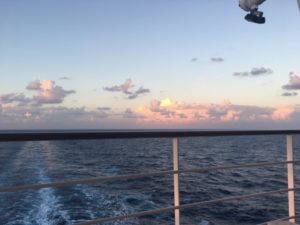 Breakfast outside, watching the wake

The gal is used to fabulous food, at home and away. Every luxury hotel today knows that its food must be superlative, with great products, prepared and served with passion and eaten in an agreeable environment. Nowhere was this better illustrated during a week-long cruise on Regent Seven Seas Mariner – see the video below, as we sailed away from Havana (cannot wait to go back, by the way). Nothing beats breakfasting outside, watching the white-topped wake stretch out behind the ship. Every morning the breakfast was a delight, but look what happens on holidays. Just as at New Year, on Easter Day there was an extra caviar table, with oscietra and salmon roe and all the trimmings, and perfectly-chilled Champagne, but see a perfect omelette, above. Yes, three kinds of eggs. 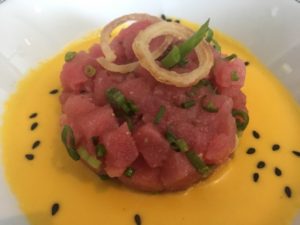 Previously, my pinnacle dining had been in Prime 7, which then had a charming Italian maitre d’, and the steaks were the best on the ship – which says a lot. But now the all-day, all-purpose, no-reservation Compass Rose, which does still have an Italian manager, has been upgraded to such an extent that I honestly prefer dining there. Tables are set with magnificent Versace plates, produced by Rosenthal specifically for the restaurant, and there is a fascinating wine list – I particularly enjoyed a Ch Haut Bourcier 2014 (the white that night was Villa Maria 2016 Sauvignon Blanc). The menu has a three-course daily special, a Canyon Ranch healthy eating menu, and just as many steaks, and sauces and sides, as in Prime 7.  Compass Rose, for instance, offers among its appetizers Iberico ham with artichokes, and Black Angus beef carpaccio Cipriani-style.  The design-your-own main course meats are Black Angus filet, New York strip or ribeye (my favourite!), plus New Zealand lamb chops, Marcho Farms veal, Smithfield pork chop, and half a roast chicken. 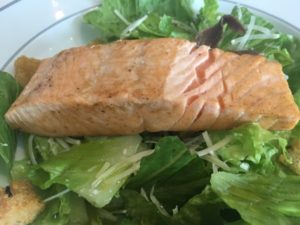 But it is not all steaks and grills. I ate a lot of fish, a real lot, with gravadlax or smoked salmon, and/or tuna tartare a highlight at lunches. I had a traditional cioppino, fish stew, when dining Italian at Sette Mari, which fortunately has an Italian chef, the marvellously-named Benedicto De Leon Bendo: that night, the red was Gaetano d’Aquino Chianti DOCG 2014. The overall chef of this busy ship, Kelly Cochrane, is Canadian, and he must have so much energy. He feeds over 700 passengers at least three times a day (some do afternoon tea, as well, and some just seem to be continually snacking). He also has to keep nearly 500 crew content, and on days at sea passengers naturally expect cooking demonstrations. 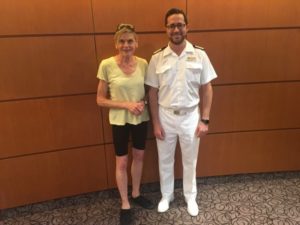 GM Massimo Arzani (daily onboard uniform, for both)

He also adds destination dishes. Two nights had Cuban buffet themes, and throughout the week such Cuban specialties as ham croquettes, chimichurri beef and milk flan were available. The main thing about eating aboard Mariner, however, is that you can design what you want to eat, say take grilled salmon off one listed item and plonk it atop a Caesar salad. I had no qualms when doing that at lunch with the ship’s General Manager, Massimo Arzani – yes, another Italian, a linguist who got into ships and hospitality by default. I told him, quite genuinely, that I had never had an entire week, in luxury hotels, at home or anywhere else, of such consistently-superb food. AND NOW SEE THE VIDEO OF THE SHIP, OH SO SADLY, SAILING AWAY FROM CUBA