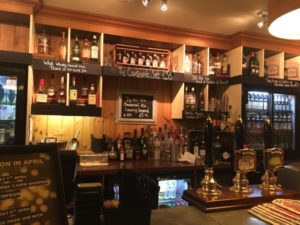 Luxury hotels should realise the joy of comfort foods. Every country has them – comfort foods, rather than luxury hotels. In some parts of Africa, it is mieliepap that makes locals feel at home: the porridge-type cornmeal mush is called sadza or isitshwala in Zimbabwe, phaletshe in Botswana and akamu or ogi in Nigeria. What are the most universal comfort foods? The gal would cite burgers, pizzas and fish and chips, as above – with classic lemon, mushy peas and tartare sauce. The challenge is that Australia, England, New Zealand and Scotland all claim fish and chips as their own. Today, says the gal, gastropubs know that they should put fish and chips on the menu – or else. 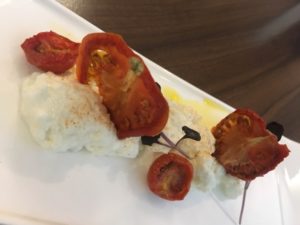 Comfort foods evolve out of popular dishes, and it is fair to say that caprese leads the category of new comfort foods. Meaning ‘salad from Capri’, caprese is a red, white and green salad – tomatoes, mozzarella, ideally buffalo, and basil or rucola – reflects the colours of the Italian flag. Ideally the mozzarella must be cut from a large cheese, tomatoes must be neither under- nor over-ripe, and the greenery should be broken by hand rather than cut with a knife. The best Italian recipes also advise preparing it at least 15 minutes ahead of time, which gives a big plus to airline caprese as obviously they are ready-to-go some time before service. This particular caprese, shown, is in British Airways’ Concorde Room at Heathrow. 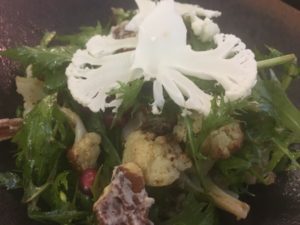 Airlines actually do some comfort foods remarkably well (I have written before about the superb kids’ burgers that United Airlines once offered, in the days when the airline had a partnership with McDonald’s). Airlines also, today, are up with the latest trends. British Airways also has cauliflower salad on some of its menus. Cauliflower in 2017 is what kale achieved a year ago, the up-to-the-minute yummy mummy and yoga fanatics’ must-have, but then kale began to wane because of its tough stalks and eating it also tarnished the family silver even more than spinach, and who has time to clean silver regularly these days? 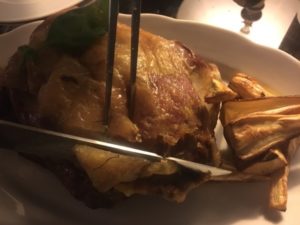 Just as some foods evolve into comfort foods, others progress from being regular to becoming special, if not high-treat, fare. A couple of decades ago roast lamb was a comfort food. Eat it with roast potatoes and fresh-made mint sauce or redcurrant jelly, perhaps every Sunday lunch time or whenever a ‘roast dinner’ was called for. Now roast lamb is a gourmet treat. Perhaps luxury hotels should also investigate, and resurrect some of those former comfort foods, to attract their deprived aficionados.