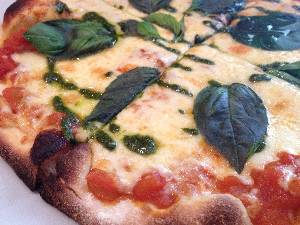 If a luxury hotel can do a few basic things well then the rest of its food offerings really do not matter. Sorry, but the gal feels really strongly about basics. Start the day with breakfast.

Real pizza addicts will even take a weeklong course in making the things, in Naples, at the Associazione Verace Pizza Napoletana. And do try the pizzas served in The Pony Line Bar of Four Seasons Hotel Buenos Aires. They are so yummy that a non-pizza addict ate a whole one, lock, stock and barrel. 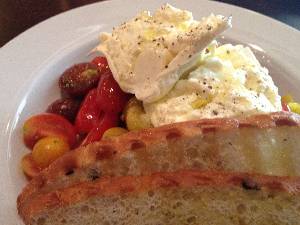 Four Seasons, as a group, is taking its food very seriously. It even has a sensational-looking new website especially for its foodie followers. The site introduces restaurants in hotels and resorts, and lists special events.

Four Seasons’ chefs around the world share recipes, even for desserts with lots of cream. But, honestly, some of the most memorable dishes do not require recipes, merely the best ingredients possible.

Take caprese salads. I have enthused before about the caprese at Castel Monastero, near Siena. Sit on a sun-filled outside terrace, surrounded by vineyards. Eat whole beefsteak tomatoes and a whole mozzarella. The caprese at The Pony Line Bar of Four Seasons Hotel Buenos Aires  also goes into the Ten Best List. 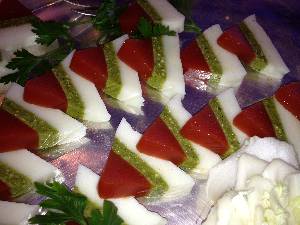 The Pony Line Bar’s caprese is at least ten different varieties of heirloom tomatoes, from tiniest green grape-look things to tennis-ball sized black varietals. Top this with an opened-up burrata, its creamy interior spilling out of the mozzarella exterior.

Every mouthful is a delight. The next caprese I eat, actually, is in terrine form, served on the buffet of Silver Cloud. Yes, the gal is back aboard Silversea, this time sailing south from Buenos Aires to Ushuaia, through the Strait of Magellan and north up the Chilean coast to Valparaiso.

The Falklands were on the original itinerary but the naïve act of D. Cameron, naming part of Antarctica after The Queen, has needlessly provoked the Argentinians yet further and blockades now face any vessel going to or from what the Cristina Kirchner and her fellow Argentinians call Las Malvinas. 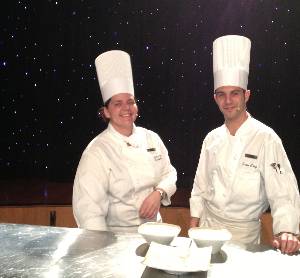 Anyway, here I am, with 206 other passengers and 220 crew to look after us. The Captain is Italian, his deputy (the Staff Captain) is Polish, the Hotel Director is the lovely bubbly Austrian, Birgit Vadlau, whom I sailed with following the Vikings a few months ago.

The chef is also female, Janine Fourie, from South Africa. As well as creating such elaborate dishes as halibut and smoked eel she can cook the basics – the beef is outstanding.

She is also a skilled presenter, as she showed doing a double-act with the Italian chef who mans the dinner-only Italian restaurant. It is a bit bizarre having a cooking class at 1115, seated in the tiered theatre which tilts gently from side to side as the Good Ship Silver Cloud braves the waves. 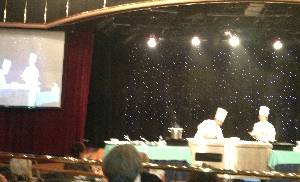 .. and a cooking class in the Silver Cloud theatre

Mr Italy is showing us how to make pasta. Make a mountain of a kilo of white flour, break in ten whole eggs and start mixing with your fingertips, get more and more vigorous until you have one ball of dough.

Use no salt as you will be cooking the pasta later in salted water.Wrap your dough in cling-wrap and refrigerate for half an hour. Roll out, a millimetre thick, and cut into shapes. 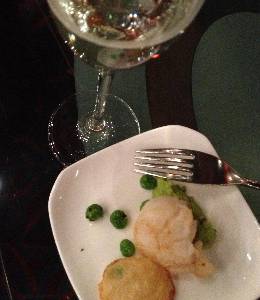 One of the tasters for the audience, with a glass of bubbly

Today he uses a circular cutter to get tops and bottoms of ravioli, filled with crab meat, cream cheese, chopped chives and pickled ginger. The pasta is cooked in boiling salted water, for three to four minutes until it rises to the surface.

Janine, meanwhile, has been busily combining peas, finely chopped onion, garlic, salt, pepper, lemon juice and zest and olive oil to make a salsa. On top of a dollop of this she puts a lightly-grilled scallop, and a single wafer-thin slice of radish in tempura batter.

Everyone in the class gets a dish to try, along with a glass of prosecco. There can be an awful lot of eatin’n’drinkin’ at sea, and that does not even include meal times…