About to cycle round the Alter See in Hamburg

Kempinski is the oldest hotel group (it has been in business since 1897) and it has many classic hotels. The lovely Kempinski Hotel Atlantic on Hamburg’s an der Alster, for instance, was built 1909 for shipowner Albert Ballin, who wanted to have somewhere for the first class passengers on his Hamburg-America Line ships.

At the panel on luxury hotels in Istanbul earlier this week (part of the Central Asia and Turkey Hotel Investment Conference CATHIC) all those participating agreed the importance of having a ‘past’: it adds value to a stay at the Atlantic, for instance, to have a lifesize blue-on-tile portrait of Kaiser Wilhelm II, vintage 1909, above the fire place at the back of the main lobby.

But the gal insists on heritage that goes with here-today. The Atlantic has such show-and-tell features as a BMW Suite, which comes with a BMW test drive.  She made do with borrowing one of the hotel’s push bikes for a 45-minute spin around the Altersee.

Congratulations - The Stafford is a hundred years old

The bikes at Kempinski’s Stafford in London are not, sadly, for guests’ use, but it seems that within five minutes of wherever you are in the city you will come across a station for Boris Bikes, the Barclays-sponsored rent-a-bike that have acquired the name of the mayor of London, Boris Johnson.

The Stafford is celebrating its centenary this year and there are lots of special happenings – plus a £100,000 package. For this you get three nights in a duplex suite and £10,000 to spend on, say, unlimited Stafford omelettes with truffles, and several glass of claret.

In addition, there is dinner for ten in the 380-year old wine cellar, and bespoke tailoring, lots of super shopping and a trip on the Thames and your choice of vehicle – in this case, Bentley, Jaguar or Rolls, and much more.  Any girl would feel like the most cosseted in the world after all that. 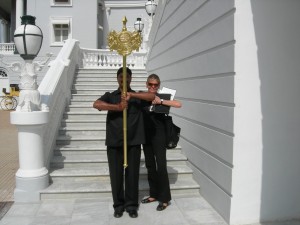 Few hotels have a past to rival that of Falaknuma Palace, a Leading property outside Hyderabad.  It was built in 1894 by Nawab Vikar-Ul-Ulmara, the Prime Minister of Hyderabad, but he ran out of money so it was taken over by the world’s richest man, the sixth Nizam Mehboob Ali Khan.

The 60-room hotel, run by Taj, has such one-offs as the world’s longest table, all 108 feet of it, built of seven pieces of oak (it seats 101). There is also the world’s first telephone exchange…  I will be back there in a couple of weeks’ time, so wait for a full report on what could be described as a ‘living heritage’ hotel.

Cycling outside Aman at Summer Palace, near Beijing

That phrase can also be applied to Amanresorts’ two properties in China.  The Aman at Summer Palace, an hour from Beijing, is in the royal kitchens near the Summer Palace’s East Gate – they were built 1750 for Emperor Qianlong, and rebuilt after the 1860 sacking by Empress Dowager Cixi. Architect is Jean-Michel Gathy, with the help of designer Jaya Ibrahim (think One&Only Reethi Rah in the Maldives).

The pair also worked on Amanfayun, outside Hangzhou, China.  In this case David Li has leased an entire former village from the government. 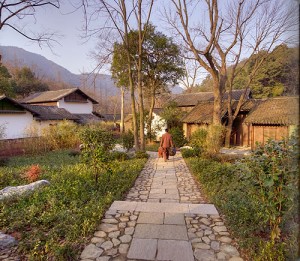 Fayan Pathway, the old village street, still runs through what was once a thriving tea plantation village

The old village street, Fayun Pathway, now pedestrianised, is still used. Houses that were once home to tea plantation workers are now in the main individual villas (this is a 42-room Amanresort) but some are leased on to local restaurateurs, including some Buddhist monks who run a memorable vegetarian dining place.

The lovely thing is that when you wake up in the morning you look out at the tea bushes on your private terrace for, yes, this is still a working tea plantation, as well as a great place for the really active.

There are seven Buddhist temples to climb up to: the closest is Yongfu, with 308 steps up from base level.

Made it! Nearly at the top... to one of the many cantilevered monasteries, still working, in Bhutan

You need to be super-duper active, however, to do justice to beautiful Bhutan.  We stayed first at Taj Tashi Thimpu, the top ‘standard type’ luxury hotel in the country, and marvellously convenient as it is only about five minutes’ walk to the Rodeo Drive of the Kingdom (if you need footwear, this is the place to buy some – we counted about 30 stores in a hundred-yard walk).

And then, suitably clad, you go on treks, sometimes hours long, up and up to amazing temples. But these are still lived in, by monks of all ages.  Memories abound, including one senior monk pulling his mobile phone out of the folds of his saffron robe to call a boy monk to come and unlock a door… Things like that make luxury travel even more worthwhile.