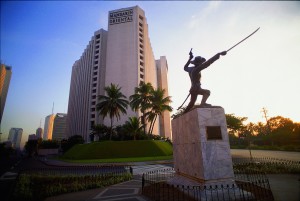 Every now and again a bit of history is good, to balance with the new of design and technology and all that stuff.  Pio Castafieda Isidro, 1860-1931, changed his name to Pio Del Pilar to avoid embarrassing his family.

He was a Katipnero, a member of the anti-Spanish movement in the Philippines whose primary aim was to gain independence from Spain. He fought as a revolutionary general during the 1896-1898 Tagalog War, and eventually died of old age.

He never, however, swore allegiance to the USA as he continued to fight mentally for Philippine independence.  He is known as the hero of Makati, and the gal was fascinated by the statue of him at the intersection of Makati Avenue and Paseo De Roxas. 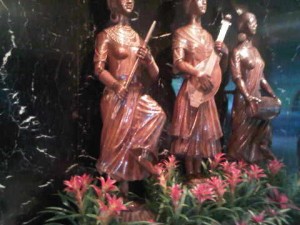 The Three Graces, one of the many statues inside the welcoming hotel

It is as if the statue of the hero is guarding the Mandarin Oriental Manila, a venerable hotel that goes back well into the last century, but keeps itself remarkably up to date.  It has a few sculptures and lots of greenery throughout its 18 floors.

Enter the lobby, a stylish black marble affair that opens, behind, to a two-floor 270-degree fan-shaped lounge (oh so appropriate for a hotel whose company logo is a fan).  Here, in the lobby, you are greeted by the Three Graces, whose brown colour is due to wood, or paint, or what.

There was too much else on my mind to bother what the statues were made of.  For instance, all the lovely Filipinas to enthuse about (remember what the Tourism Secretary says, he alone has a nation of beautiful people… and it is true). 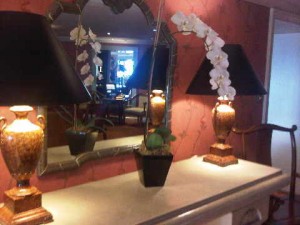 It is said too often, but the club lounge here really DOES have a residential feel

Many of them are found up in the 17th floor Mandarin Club Lounge, a really enjoyable space with, again, lots of greenery but also masses of books and residential-type lights, and a pretty soft-tomato patterned wallpaper.

The designer is Sonia Santiago Olivares who cleverly has thrown all textbooks about hotel club lounges out of the window.  This is a space you want to return to.  It has lots of comfortable chairs, with some tables high enough for proper dining rather than being set at kids’ knee height.

There is classical music, and you have two computers with a printer.  You also have lovely staff led by Camille Javier, and nothing, it seems, is too much trouble. 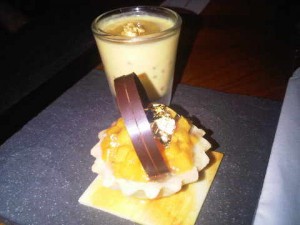 A mango tasting plate brought to a guest at cocktail time

Someone had heard they had a mango-guzzler staying.  No sooner had she sat down, at cocktail hour, before a chef’s special, two little mango delights, appeared.

The others around were nibbling, or rather guzzling in some cases, on the usual ‘cocktail hour freebies’, things like crudités and nuts and cheese, but also on outstanding proper foods of the calibre of miniature, two-bite hamburgers.

This was the kind of best First Class food that you get in the best airline loyalty lounges – British Airways, Cathay Pacific, Emirates, Etihad, Qantas, Singapore Airlines and Thai (anything but any US-based carrier).  Admirable. 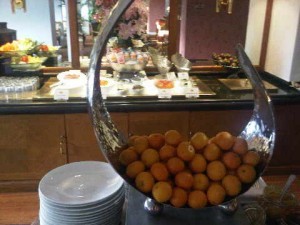 Breakfast view in the club lounge …

Club lounges are so important to the premium guest.  A list of international VIPs’ favourites would certainly include that at InterContinental Hong Kong, which was once a 1930s-style Shanghai dance room.

That particular lounge is light and airy, looking down into the main lobby and sensibly connected to the business centre.  When it opened it served Dom Pérignon at cocktail hour, and even today it has REAL champagne (Perrier-Jouet).

Another ace lounge is the Shanghai Hilton’s, set up as if it were a proper restaurant.  Fairmont’s lounges are always reliable, comfy and cosy and ultra-friendly, as are Shangri-La’s.  Some hotels say they do not ‘do’ club lounges, their whole hotel is a club lounge.  Baloney, any hotel over 50 rooms needs an inner sanctum. 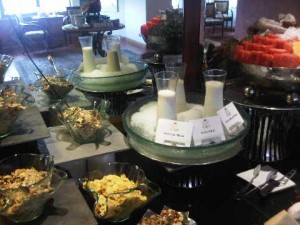 .. when there is a choice of milks, and commercial and home-made yoghurts

Breakfast starts in the lounge here at 0630, every day of the week.  Now here is another fallacy, that club lounge guests do not want to start as early on weekends as they do during the week.  Not true for all.

There are many who need the same-hour starting regardless of the day.  And of course, in any luxury hotel, they expect fresh juice, as here.  At this lounge, there is not only a full array of cereals but a choice of labelled milks.

As well as find-anywhere commercial yoghurts there is homemade yoghurt in metal-topped glass jars.  And of course, here, there is fresh mango among the fruits – and a plate of it is brought over, without asking. 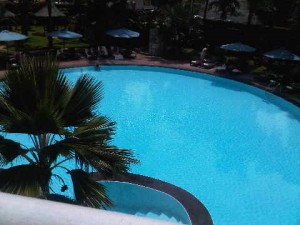 Looking down at the pool …

Looking down from 1833, the Oriental Suite (with more green leaves but no sculpture) is the pool, in an absolutely gorgeous sculpted garden.  Getting there is quite an adventure.

Head down to the second floor and go through the outer entrance to Tin Hau  restaurant and you find yourself at the top of a metal staircase.  Ouch, over-30C temperature, 20 metal steps and no slippers (my own fault, I never wear them – they were of course provided in this delight and detail-oriented hotel).

But I made it, and had an excellent swim, and watched iced lollipops and fruit skewers being taken around to loungers by a man in a blue shirt and grey trousers. 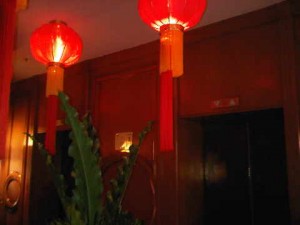 .. which intriguingly is reached via the entrance to the Chinese restaurant

As I lap, I think about Manila envelopes, sturdy brown envelopes.  Were they invented here?  Back up in 1833 I check Google. It turns out they are named for Manila hemp, fibre from the abaca, a relation of the banana.

The Philippines is one of the main producers of abaca.  Learn something every day, gal. And afterwards, as I walked the perimeter of this really agreeable 442-room hotel, I watched a daily briefing of the security guard.

There is something so comforting about staying here, and it is not surprising that many business guests, especially from Australia, return again and again.  Many of them seem to make the club lounge their Mansion in Manila – with, undoubtedly, at least occasional sorties to the spa, and a chance for a single malt and cigar in Kipling’s.