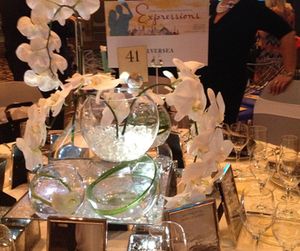 This gorgeous table is just one of 130 at the Destination Showcase Dinner, at the Bellagio, Las Vegas, August 11th 2014. This is just one tiny element of Virtuoso Travel Week, which has seen over 4,420 of the world’s top travel professionals – cruise lines, luxury hotels, travel advisors and others – meet for four-minute speed-datings that would fill the Guinness Book of World Records several times over. Anyway, says the gal, back to this particular dinner. Those who took tables decorated them as they thought fit. Silversea was remarkably restrained. 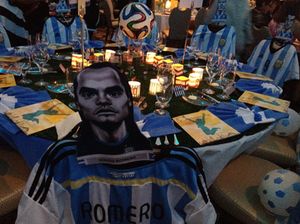 Other cruise lines had shiny blue table cloths and ice sculptures shaped like ships, and miniature boats and so on. Look what Argentina did. Blue and white are the national colours. The backs of the chairs are draped in football shirts, complete with images of players. Indian tour companies laid their tables with copper and ceramic dishes on richly embroidered scarlet cloths. Pure New Zealand had inner-lit blocks. The tourist boards, whether national or city, made great efforts – there were 96 tourist boards in all. 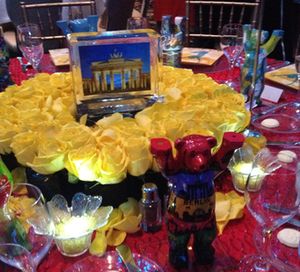 Look at Berlin’s table, with its real yellow flowers surrounded by small standing bears. In the centre is the Brandenburg Gate, in an ice block. Main sponsor of the dinner was Brand USA, led by its charismatic SVP Global Market Development, a Colombian-born former Marriott hotelier, Alfredo Gonzalez, who headed Fort Lauderdale Tourist Board before being enticed to promote the whole country. How is Brand USA funded? Four dollars of each $14 ESTA permit, to enter the USA, goes to TSA security, with the remaining ten dollars bound for Brand USA, which brings in $100 million a year. 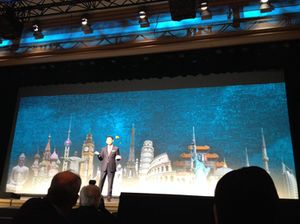 He is talking big, is Alberto Gonzalez – he is determined to reach President Obama’s goal of an annual 100 million foreign tourists coming to the USA by the year 2021. I was sitting between him and Matthew Upchurch, the brilliant Chairman/CEO of Virtuoso, who had also invited the head of Merrill Lynch’s Retirement Planning, Bill Hunter; TEDxAustin founder and futurist Nancy Giordano, and the head of Virgin Galactic, Dave Clark, who has been fascinated by flying since small boyhood – I later sent him my article on Gan. Virtuoso’s hotels boss, Albert Herrera, made one of his eloquent speeches, and Switzerland won best tourism board of the year. 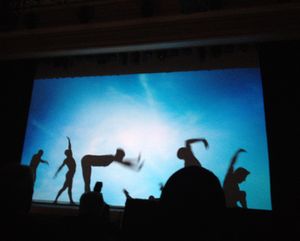 And then the finale. Everything Virtuoso does is better than best. The luxury hotel’s culinary team provided Ahi tuna wrapped in soy paper with edamame emulsion and sweet soy reduction with Serrano chilies, and then Bellagio pot pie with pulled organic chicken, duck sausage and black truffles. Wines were a choice of Joel Gott California Sauvignon Blanc 2013, St Helena, or Allamos Malbec Mendoza 2013, and the post dessert was, well, a treat. Behind a gauze covering the stage, dancing acrobats whirled and twirled, making silhouette shapes. Their last ‘shape’ spelled out Virtuoso, in bodies.