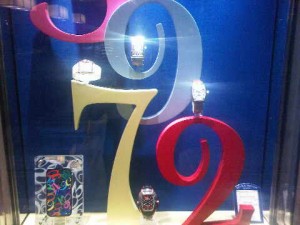 One of the colourful vitrines at Mandarin Oriental du Rhône, Geneva

So here we are, back in Geneva, and it is time to take a stroll along the lake, visiting three luxury hotels en route.  Let us start the day at Mandarin Oriental du Rhône, celebrating its 62nd birthday this year.

Wow, how the old dame has revitalized herself (well, its boss, Marco Torriani, has been here since 1989 – he must have started in his teens).  The hotel was built for the Lendi family, then it became part of Georg Rafael’s luxury empire, and thus, in the year 2000, passed to Mandarin Oriental Hotel Group.

Today it is decorated with lots of luxury vitrines, offering the kind of goodies that diamond-seeking visitors with lots of cash are delighted to see, and buy.  The gal is merely looking. 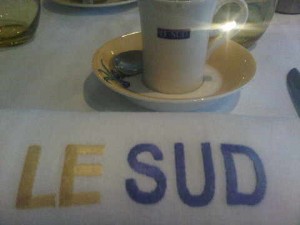 The hotel has two fabulous restaurants, Rasoi, run by Vineet Bhatia, and Le Sud, linked to Paul Bocuse’s brasserie of the same name.  Try breakfast in Le Sud.  Your table is set with Bocuse’s own china, designed by Vavro (who does all Bocuse’s designs) and made by RAK porcelain.

The restaurant’s overall design is by Adam Tihany, who did the famous DINNER by Heston Blumenthal at Mandarin Oriental London Hyde Park.  A nice little touch here in Le Sud is that real linen napkins are embroidered with the restaurant’s name and a cut little buttonhole is for messy male eaters who want to loop said hole over one of their shirt buttons to stop porridge or scrambled egg splattering down. 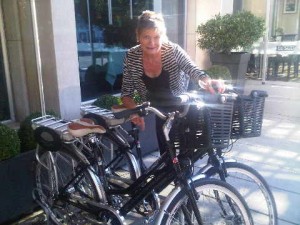 Bikes await, outside the hotel

You can get anything at breakfast in Le Sud and the servers will not turn a hair, and there are plenty of serious newspapers – major urban luxury hotels that do not have the Financial Times and International Herald Tribune available, within geographic reason, at breakfast are as bad as those gyms who require you to scroll through 40-odd, and I mean odd, television channels until you find something in English, even if it is only Sky.

On the plus side, any hotel that, like Mandarin Oriental du Rhône, has prominent bicycles for you to borrow gets a big good mark.  In Tokyo, for instance, the list includes Four Seasons Tokyo at Marounuchi and The Peninsula Tokyo: in Copenhagen, the Hilton’s silver bikes are a great way of getting from the hotel, at the airport, to downtown. 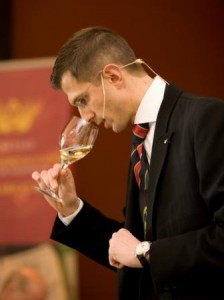 Now this requires absolute dedication as he had to learn the minutiae of Italian wines for his earlier award, and the complexities of Swiss wines for this current honour.   He also has time to pursue his hobby, collecting watches (a term that does not normally mean Swatch, although it could include some of the 16 brands in the Swatch Group, including Blancpain and Longines). 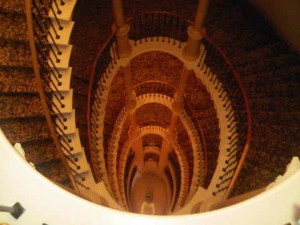 Looking down the hotel's stairwell

Des Bergues was named by locals after a German, Hans Kleberger, who lived on this spot in the first half of the 16th century.  Wow, we have discovered a German empire of yore…  Today, the building dates back to 1834, with upper floor additions which have included an extra floor at the top of the luxury hotel’s sensational oval staircase.

Like everywhere in the hotel, the design is by Pierre-Yves Rochon, whose eclectic portfolio includes the classical Four Seasons George V in Paris and the business-like look of the rebuilt Four Seasons Park Lane, London.

Here his concepts include a rear lobby lounge covered with blue-picture white wallpaper hung with lots of pictures (the opposite of minimalism). 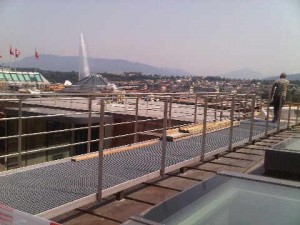 Looking across from its rooftop...

Next March or April Four Seasons Hotel des Bergues will finally open its long-awaited spa, with 12,000 sq ft up on top of its seven floors devoted to an indoor pool, a six-room spa and a massive 24-hour gym.

There is also a walkway being built on the rooftop, to form a platform for amazing viewing and sunbathing and the like.   This is all Rochon, of course, though apparently the hotel boss, Jose Silva, has to fly regularly to Asia with fabric swatches and bathtaps in his hand-baggage to consult with the hotel’s owner, who has meticulous ideas on what should be where. 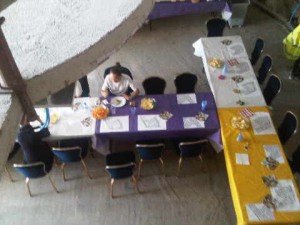 .. looking down at the pop-up restaurant for the staff

Today is the monthly staff ‘lunch surprise’.  This time it is the turn of the hotel’s technical department to choose and they have used the opportunity to turn spa construction into a pop-up restaurant.

We look down, from the floor above, to see them all tasting what happens when techos turn into culinarians.  At another point, in a public area, we look out at how an inner courtyard has, just a few months ago, been turned into an inner garden.

And then we go down to ground level, for our own lunch, among real olive trees on the outside pavement, for an amazing salad with black truffle bits and bright yellow home made ravioli. 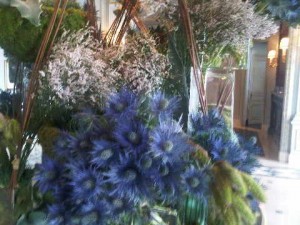 Colour abounds.  Look at the flowers everywhere in this hotel.  They are the work, or rather art, of Sergio Mazzetta, who apparently will not use any blooms from the Netherlands as he only wants the real McCoy, found locally here in Geneva.  Since you do not actually see any hothouses or flowers growing commercially, this obviously requires a conjuror’s skill.  Bene, Signor Mazzetta. 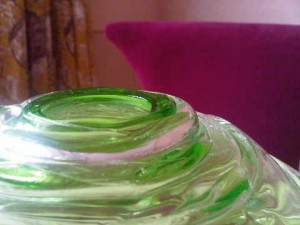 Mid afternoon, it was a further few minutes’ walk in blazing sun, east again, this time along quai du Mont Blanc to the Alpine Garden, with its monument to the Duke of Brunswick.   I could have continued straight, to the Kempinski Grand, but I diverted across the Garden to Le Richemond, celebrating its first birthday as part of the Dorchester Collection.

There are still so many signs of Olga Polizzi’s designs, done for her brother, Sir Rocco Forte, who ran the hotel for just under four years from September 2007.  Suite 101, a signature space overlooking the Alpine Garden and the lake, still has its bright fuchsia velvet chairs, which go brilliantly with a dayglo green vase.

Afternoon tea, or perhaps a glass of water in this heat, offers great people-watching if you sit on the outside terrace  (Klaus Kabelitz, who runs this lovely hotel, did great things with his fashion afternoon tea at his previous landing-stage, The Berkeley in London – what will he do here?).

And then it was time to take the Porsche Rimowa up rue des Alpes to Geneva rail station.  Where now, gal?