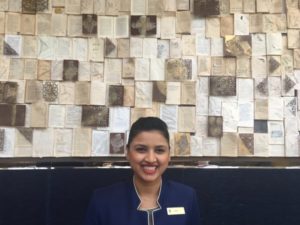 Front desk has a wall of real book pages behind

Light-and-bright attracts all ages, and makes them smile. The gal arrived at Shangri-La Hotel, Dubai – one of those side-by-side somewhat-uniform skyscraper blocks along boring, traffic-heavy Sheikh Zayed Road (but, good news, according to Gulf News and other reports two additional bridges will be built across that highway to divert some of the wheels on to side roads). Go into Shangri-La’s established luxury hotel, however, and anyone immediately feels elevated. Oodles have been spent redoing the public areas, which have been done by HBA (years ago you could always recognise the HBA work but now the company is amazingly versatile). Vertical panels that looked like sand dunes have been removed from balconies overlooking the four-floor open atrium. Front desk has been relocated and behind it is now a wall of books, yes real books. No wonder the people working there are smiling. 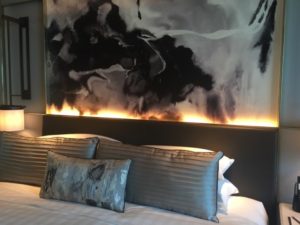 HBA’s new-look bedrooms are gorgeous. The soft browns and conservative vibes of former rooms are replaced by light-brights, champagnes and soft blues, with subtle lighting. I like the corner-set fixed seats, covered in pale blue heavy-duty material: these are big enough to accommodate an open wheelie. I am sure I am not the only frequent – all right, in my case, near-continuous – traveller who never uses a folding baggage rack. I used to put my open suitcase on the floor but now, to save time, I put a towel on a sofa, with the open bag on top of that.  This not only saves valuable minutes when unpacking and, later, packing up again but it also, I hope and cross fingers, cuts down the chances that I will leave something behind. The hotel-hopper is rather like a cruise ship popping from one island to another: leave anything behind and you never see it again. 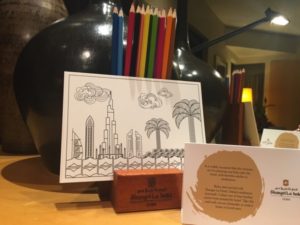 Rooms have outline-only cards, to colour

I must say how delightful it is to be back at this hotel. Rooms have swivel chairs at the desks, drawers include complete office kits, with long-blade scissors, and there is not one easy-work alarm clock but two, one bedside and one in the bathroom. Since my last visit clever GM Gerhard Hecker, whose own children range from pre-teen to late-twenties, has also added all-ages colouring kits, big-size postcards showing Dubai sights, with crayons (make-em smile). I wanted more smiles, so I headed at sundowner time to the fourth floor outdoor pool. Its surround has as much bright pink as possible and it evolves into iKandy meeting place as the hours pass – see my video below. What particularly amused me today was that one shisha pipe, pink of course, even had my initials on it. See above. 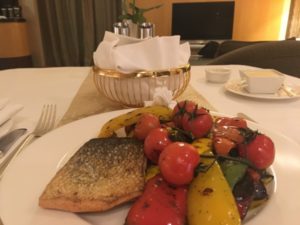 Part of the upgrading of this ultra-friendly luxury hotel has been putting gold shell- like half-walls to give privacy to Dunes, the all-day restaurant that is really an extension of part of the lobby. As last night was a religiously-decreed dry day, or rather 25 hours, I decided to have room service dinner. It was quick, complete, and tasty, which is just what inroom dining should be. Yes, in a vacation villa situation you can offer multi-course private dining, or dining by design or whatever you want to call it, but when we are talking about dining in a bedroom at an efficient hotel popular with CEO-level business people, speed must be added to such necessary attributes as efficiency, quality, flavour, and service. Now return to iKandy, via the early-evening video that is shown below.