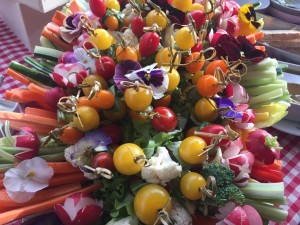 It is really difficult to slot in any more events at the global International Luxury Travel Market ILTM in Cannes. As well as official ILTM-organised happenings, there are extracurricular slots that are quickly snapped up. Monday night, after the Forum, saw exclusive parties hosted both by Hyatt at Grand Hyatt Martinez, and by Oetker, working with Travel Leaders Group and UltraTravel, at Hotel du Cap in Antibes. Fairmont had a dinner Tuesday before the official party. Breakfast hosts included Peninsula, and Ritz-Carlton. There was a memorable lunch given by InterContinental, and every day Dolder Grand, Zurich, joined with Terre Blanche, just 30 minutes’ drive from here, for the ideal event lunch. Everyone was short of time and here, on a private yacht moored five minutes from the show, you could theoretically be in and out in no time. 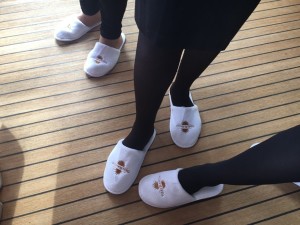 Slippers to walk the plank

But it was not as easy as that. First you had to find the boat, then take off your shoes, put on hotel slippers and literally walk a wobbly gang-plank. Onboard there was a cornucopia of lovely bright and healthy crudités and cold cuts and cheese (and yes, dear reader, if you think I am turning into cold cuts and cheese here in Cannes, you are quite right, as long as you blend in tastings of caviar and foie gras – and the marvellous breakfasts that keep a workin’ gal sane). I met a couple of lovely New York-based advisors, mother and daughter, who not surprisingly know their home country, India, inside out but they were so knowledgeable, too, on China, especially the two Amans there. In the luxury travel business you can really learn, it seems, from everyone around you.   The only drawback about hosting on a boat is that it is necessarily cramped, but the pluses include fresh air and the speed of an event. A seated, served lunch is minimum 90 minutes, unless you are rude. 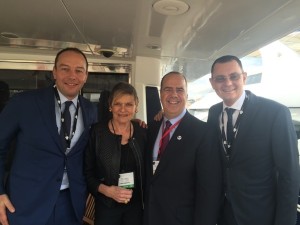 Speed is, indeed, of great importance when every one of the nearly-4,000 people at ILTM this year wanted to meet as many people as possible. Fixed appointments are, admittedly, 20 minutes but you may want to continue a conversation and there are friends around whom you see fleetingly, but do not have time for a proper talk. Matthew Upchurch, whom I had not seen since the brilliant last Virtuoso Travel Week in Las Vegas, was among those who walked the plank (and put on slippers) at this party, and he was obviously thoroughly enjoying himself as he stayed far longer than some. As always, he had lots to say to our two hosts, Dolder‘s MD Mark Jacob, and his counterpart at Terre Blanche Hotel Spa Golf Resort, Gilles Fouilleroux. Dolder, by the way, is year-round, but Terre Blanche is now closed through to the spring. Next came another afternoon of fixed meetings, until the evening began. 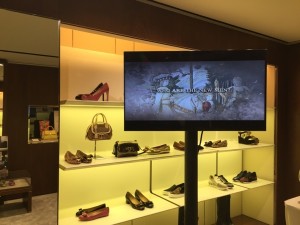 Lungarno hosted in the Ferragamo store

That night it was to be six cocktail parties, fortunately timed so they were not entirely consequtive.  Lungarno‘s party, hosted by CEO Valeriano Antonioli, is always tremendously popular as it is held in the Ferragamo store, right on the Croisette (I think they sell quite a lot of fashion items during the party, actually). I went on to support another luxury hotel group, Taj, host Chinmai Sharma: ILTM held its own party, at Venue 61. Now what WERE the other events that night?