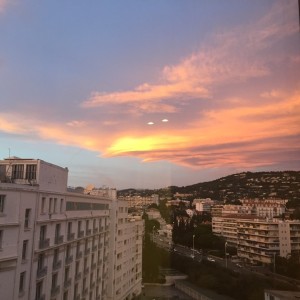 OH what a sunset…

Regulars to ILTM in Cannes have their favourite hotel and for as long as she can remember the gal has made the luxury Martinez her home, and her office, during the four days of the world’s biggest, and most important, show in the uber-luxury travel world. This year the sun shone, and the sunsets were magnificent.

Every morning, it seemed, the first view was looking out over the Croisette to the Mediterranean. Watch the sun come up over surrounding buildings. Long to have another hour’s sleep, let us be honest, but get downstairs as fast as possible for the hotel‘s fabulous buffet breakfast (would love to know where they get their strawberries from – and they go superbly with the Danone yoghurts, even though those sealed glass jars are darned difficult to open, but fortunately for three days running I had my Own Personal Yoghurt Butler, until he was enticed away to Bologna). 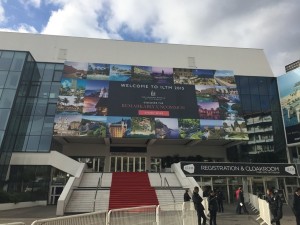 Red carpet up to ILTM

And then, in plenty of time for meetings, a good brisk walk along that Croisette to the Palais des Congrès, home of the Cannes Film Festival – and ILTM, and a few other shows too. This year ILTM had literally put out the red carpet and the 4,000 ILTM delegates, exhibitors and buyers, did comment as they arrived for the pre-show Forum. Up the red carpeted steps and in to the theatre to listen to pundits, and later network with friends, established and new. The outdoor spot at the bottom of the steps is always highly coveted, for obvious reasons, as everyone has to walk past going into the show. This year there were a couple of Ferraris from Red Travel and a simply enormous 51-foot Mercedes-Benz pantechnicon publicising Etihad Airlines. 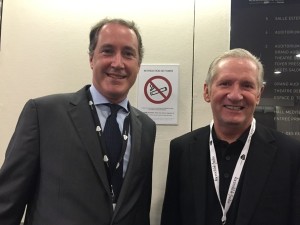 This cream and gold bespoke vehicle had been conceived and implemented by #reimagined, and driven to Cannes from England by MSL Global. One entire side opened up so you could see Etihad‘s seating possibilities. The Residence is the commercial airline world’s only three-room cabin, on A380s (as is the First Apartment seat, here). There are also a B787 First Suite, and, for both plane types, Business Studio and Economy Smart seats. At one point Etihad‘s charismatic CEO James Hogan was supposed to be in Cannes but he was obviously required to stay back home to watch Niko Rosberg win the – Etihad sponsored – Abu Dhabi Grand Prix on Sunday, November 29th, 2015. That event also claimed Abercrombie & Kent Chairman/CEO Geoffrey Kent (who needed to promote his best-selling Safari autobiography), and Mike Batt, Chairman of Travel Leaders Group, but good for Mike, HE did fly straight on to Cannes, arriving in time for Monday’s party, and for the ILTM show. 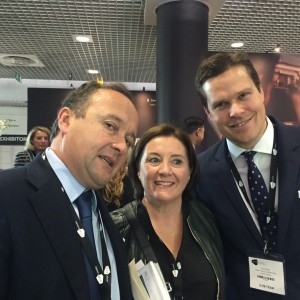 It is really notable how much effort ILTM enthusiasts make to get to Cannes, which requires flying into Nice and then ground transport or a helicopter. Winner of the longest journey might well be, for 2015, Richard Schilling, long-time GM of the luxury Martinez hotel, actually, until he decamped for the island life of St Regis Bora Bora. Rafael Serrano, working on the adaptation of London’s historic Admiralty Arch, made his first visit to the actual show, and networked nonstop, as did ILTM‘s skillful conductor Alison Gilmore, and her colleague Nick Pilbeam who has cleverly just signed a symbiotic arrangement, for all Reed hospitality shows, including ILTM, with oneworld – American, British Airways, Cathay, Finnair, Japan Air Lines, Qantas and so on. Come on Etihad, you should join up.