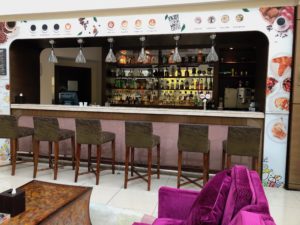 Two years after opening Abu Dhabi’s luxury Shangri-La Hotel, Qaryat Al Beri, the owners, the Al Jaber family, realised if they did a slightly simpler additional hotel everyone would benefit.  They therefore opened the good-value and good-fun Traders Hotel, Qaryat Al Beri, and boy it makes the gal smile.  Go into the lobby and it is a riot of colour, as the video below shows. It is also educational, as the lobby coffee bar finally explains which coffee is what. Apparently at night the lobby is even more of a riot of colour. 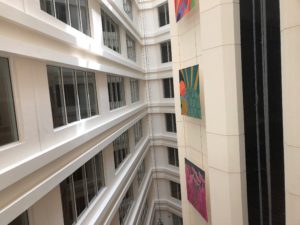 Ahmed Issa, the Lebanese foodie with whom I had dinner in Bord Eau at The Shangri-La Hotel, Qaryat Al Beri, is GM here, and not surprisingly he was really enthusiastic about his Beirut beer promotion, shown above.  It is not surprising there is a Lebanese beer – few nations do not have their own beer.  Right, he explained, this hotel is deliberately sold as four star, which means, just like Burgenstock’s original hotel, they can sell to pharma and other meetings companies, and to groups.  They over-deliver, and complaints here are once in a blue moon. If anyone dares to air a grievance about anything they can always be upgraded, to Shangri-La! 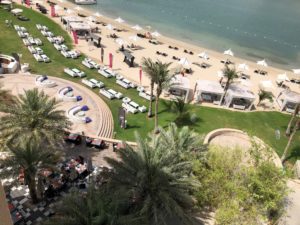 Look down at the beach

The two hotels are separated by lived-in villas, mostly long-let – these residents have the run of the whole complex but no others can use their lawns or beach, or their two pools.  Traders’ guests, meanwhile, have a 24-hour Technogym, a popular rooftop pool and a really popular beach.  They can use the shared spa, and they can pay full rate, and sign, at Shangri-La’s restaurants.  And anyone can shop in the substantial soukh that is also part of the complex. 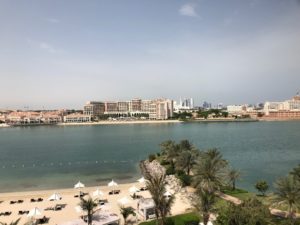 .. and across the Grand Canal

What a clever idea.  Stay at Traders and you still have free WiFi and oodles of space.  You don’t have an espresso machine but you get a tea-kettle and 24-hour room service, and you know you are saving about half the basic room cost of a Shangri-La room.  You do, however, miss out on that Shangri-La luxury, the Horizon Club, but all seasoned travellers know that a lot of success is making a choice that is right for you.  And, I must admit, I do love Traders’ lobby! NOW TOUR THE LOBBY