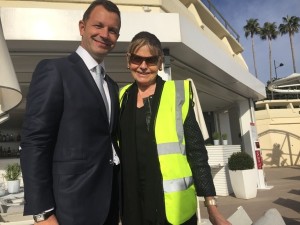 It is a long time since the gal has raved about a Sunday brunch, and exclusively about this weekly occurrence. But not often is the sun shining, the temperature mild and the setting exquisite, and that is what happened this past Sunday, at Hotel Majestic Barrière, Cannes. Hotel GM Pierre-Louis Renou had even given up his beloved Sunday pastime, piloting his own plane, to be host (what is the day-glo safety vest doing? the ILTM team was also sitting there, out in the sunshine, and they had a spare vest, which will be incredibly useful for cycling, back home, as the evenings darken). It turned out to be a totally memorable couple of hours. 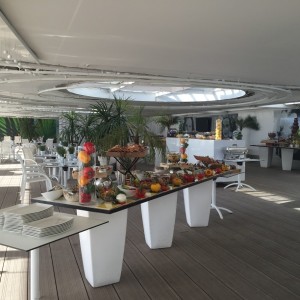 Inside the beach club

Last year the 349-room hotel added a proper beach club, across La Croisette from the main building. According to local regulations it must be entirely removable so no concrete or below-surface supports are allowed. I wondered what might happen if a big storm came in, but there was no likelihood of that today. The sun just – shone. Everyone was in sunglasses – everyone, that is, with the exception of Martein van Wagenberg, GM of Guanahani in St Barths, obviously used to much more powerful rays than this. He is also used to higher temperatures so he was recognisable by his thick apricot-coloured sweater. The buffet, prepared by chef Maryan Gandon, was laid out inside. 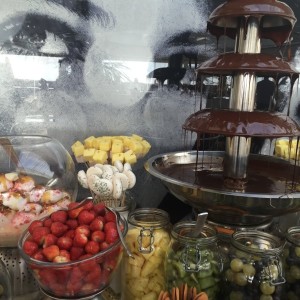 Seafood, including oysters, was absolutely magnificent, as were Niçoise salads, but it was the desserts that really stood out. Putting them in glass fishbowls was a brilliant trick, and flowers and rear decoration made it all as pretty as a picture. I thought back a few days to how The Savoy is finding good business for its Temptation menu, cocktails, desserts and chocolates (so much for healthy eating). While he ate, namely two successive plates of oysters, Pierre-Louis Renou told me excitedly how Barrière opens a new hotel in Courchevel for the 2016-2017 season, and how he, personally, will be overseeing – from his ongoing Cannes base – the takeover of the Carl Gustaf in St Barths in 2017. 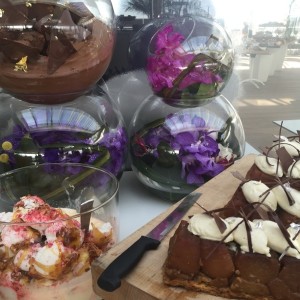 Perhaps next time I am in this luxury hotel, therefore, it will be him wearing a thick sweater, who knows. One thing I do know is to recommend everyone coming to ILTM here in Cannes to get into town at least a day early. You run into people like Albert Herrera of Virtuoso taking fresh air along the Croisette, and lots of top people sensibly also having brunch at the Majestic‘s beach club. I am putting next year into my diary, right now.