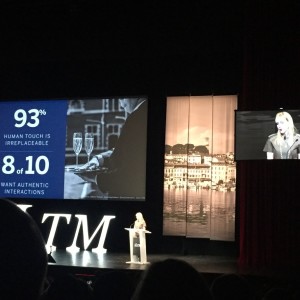 Take over 4,000 people, from 90 countries, and put them all in the Palais des Congrès, Cannes, a building that is more than used to such numbers as this is where the Cannes Film Festival does its stuff. Those associated with luxury hotels, and other aspects of luxury travel, tonight tiptoed up the red carpeted stairs to celebrity music, to go into the auditorium for the opening of the annual International Luxury Travel Market, Monday November 30th, 2015. The Forum is the educational side of the whole four-day event, and ILTM‘s Senior Director Alison Gilmore welcomed everyone, at this very special time. And, says the gal, she gently asked us to look after each other. 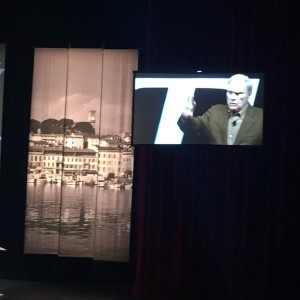 The Forum theme was story-telling. American Express VP Strategic Partnerships, Consumer Travel, Claire Bennett, asked where the industry is going, and shared data. Then an absolutely brilliant Swiss-German, Dr Thomas Trautmann, a computer engineer with a PhD in artificial neural networks, showed how communication can go so wrong. A builder putting in a bid that is all about ‘I’ may get 10% satisfaction. If the bid is turned round to imply ‘You will get the perfect house, with our help’, the success rate rises to 50% (he took a relevant website and more or less trashed it in front of the audience, by showing it was far too egocentric for the supplier rather than the party being spoken to). The third speaker, Robert McKee, is a professional story-teller for screen writers and other entertainment greats. 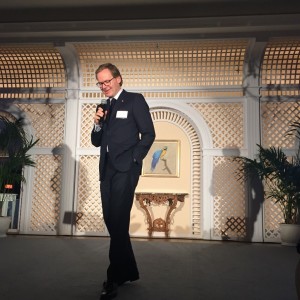 Frank Marrenbach on another stage…

And then we bundled off, some to lovely ILTM-hosted drinks, others into the mild late-November night for dinners hosted by Hyatt, at Grand Hyatt Martinez, and by Oetker Collection, Travel Leaders Group and UltraTravel, at L’Hôtel du Cap-Eden-Roc. Just as he had done only five days before at The Lanesborough, Oetker Collection‘s Frank Marrenbach was among those welcoming 100 lucky diners (Hôtel du Cap is actually closed for the winter but it had reopened specially for this event). Mr Oetker had been on a cruise ship sailing past the hotel back in 1968. He saw it from afar, wanted to buy it, which he did, sight unseen, and the contract was signed in Argentina in the middle of an electricity cut. Marrenbach shared how the future additions of management contracts in New York and São Paulo mean that now, more than ever, he has to think how to improve. 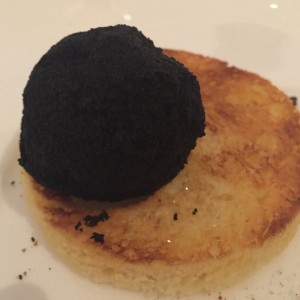 Speeches were commendably brief. Travel Leaders‘ Mike Batt, who says anyone is only as good as his reputation, showed how he had taken annual sales up to $21 billion, and then he introduced his successor as CEO, Ninan Chacko. Hôtel du Cap’s Arnaud Poëtte and his culinary team produced a stupendous meal, starting with foie gras from Landes, coated with black truffle and on a round of toasted brioche. We had langoustine ravioli, turbot meunière and a chocolate composition, with Alfred Gratien Champagne and Bandol Ch de Pibarnon 2011. And then we got back on buses for the half hour journey back to our respective ILTM luxury hotels.