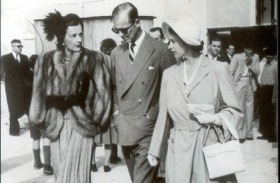 Princess Elizabeth and the Duke of Edinburgh with, left, Countess Mountbatten, on Malta

The Queen and the Duke of Edinburgh spent part of their honeymoon on Malta, and from 1949 to 1951 Princess Elizabeth, as she then was, stayed on the island while her new husband was on active naval duty in the Mediterranean. Now all those involved in luxury hotels, and the entire island, in fact, are eagerly awaiting her next visit, for the Commonwealth Heads of Government Meeting, commonly called CHOGM, to be held November 27-29, 2015. And it is not only the Queen and the Duke, but they are bringing Charles and Camilla (HRH The Prince of Wales and the Duchess of Cornwall). Apparently, the gal is told, roads will be freshly tarmaced and roundabouts will suddenly sprout lots of flowers. 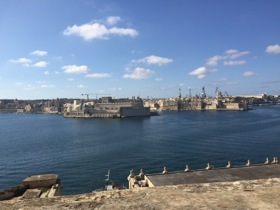 Looking across to Fort St Angelo

They love special events, do the Maltese, but they also love any tourism opportunity. Tourism is very very important and yes, some people come to buy passports, to get EU entry. The former GM of one eight-room boutique hotel told me that during one year she had no fewer than 40 guests who had come specifically to buy passports, including one Russian family from Vladivostok who wanted their children to have future security. Massive investment is going on in Valletta as well as elsewhere on the island. I was taken around by Steve Samuels, the local manager of Iniala, the company behind the Iniala Phuket resort. We looked across Grand Harbour to Fort St Angelo to see a renovation that might become a hotel. 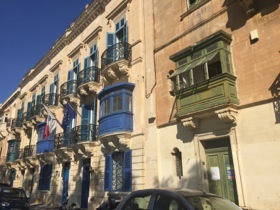 Iniala’s boss Mark Weingard first came to Malta four years ago, loved it so much that, like many other discerning foreigners, he decided to buy here. Most just buy one place. So far he has bought over two dozen. Look at these buildings, on Barbara Bastion, with their distinctive Valletta windows. The green-window building has still to be renovated, with an elevator put in, before it is turned into five apartments to rent: the blue-window building, currently leased to a bank, will be returned to him by 2019 at the latest and he will probably make it into a hotel. 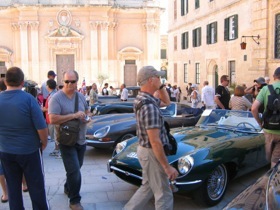 Those who run luxury hotels in this year-round-sun island have lots to look forward to. Malta has the EU Presidency in 2017, and it, or technically, Valetta, is European City of Culture in 2018. But there are also annual events, like the famus Mdina Grand Prix. There are many avid vintage enthusiasts here on the island but others bring their cars from all over the world. This is a good time to be here: there is a pre-event black and white party at Corinthia Palace, which also caters throughout the event, October 8-11, 2015.