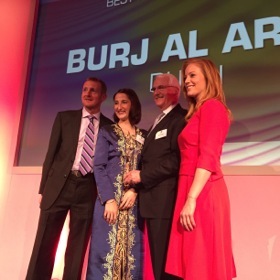 This has been quite a week for luxury hotels, especially those favoured by the well-heeled UK market, says the gal. Monday May 18th, 2015, was the annual Ultras day, and evening. Voted by the readers of the Daily and Sunday Telegraph, and by the glossy Ultratravel Magazine, the best hotel in the world was deemed to be – Burj Al Arab, Dubai. Gerald Lawless, who went to Dubai on what turned out to be a one-way ticket sometime in the late 1970s was, as President and CEO of the Jumeirah Group, there to accept the award. He took along a lovely Jumeirah Guest Services Manager, Melanie Bisch, in Arab dress. 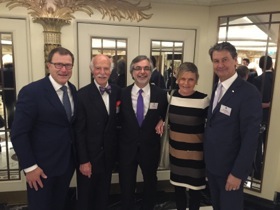 Ultratravel was the brainchild, ten years ago, of ‘Mr Ultra’, Nick Perry, who still oversees the original UK edition plus siblings covering the Middle East and USA. The format of his Ultratravel day and evening here in London, at The Dorchester, is always the same. First, a half-day Forum, with TTGluxury – and sponsors were Abercrombie & Kent, Jumeirah and Silversea. One highlight was Wealth-X md EAME Marc Cohen. He threw out lots of facts and figures and fortunately I was sitting near the front of the room so I could read his slides. 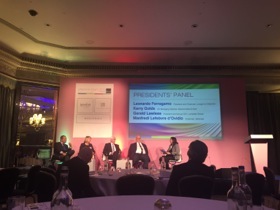 Another signature was The Economist‘s Executive Editor Daniel Franklin chatting with Minor Group‘s Chairman Bill Heinecke. Then there was a one-to-one cross-examination of leaders by journalist April Hutchinson. She spoke with two presidents, Lungarno Collection‘s Leonardo Ferragamo, and the aforementioned Gerald Lawless. Then came a chairman, Manfredi Lefebvre d’Ovidio of Silversea, and also Kerry Golds (she is md UK for Abercrombie & Kent). Then there was a lull while some started on the Prosecco kindly provided by Emirates while others, like me, went off to change and the banqueting team of the hotel set tables for dinner. 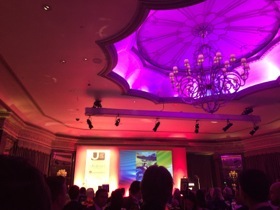 The ballroom, and pre-dinner presentations

Nick Perry had invited a lucky 330 to the ULTRAs evening. There were masses of long-time friends, including ‘Wish You Were Here’ Judith Chalmers, and Anton Mosimann, who had popularised bread and butter pudding when he was chef here at the hotel in the 1970s (currently, his company is catering four national stands at Milan World Expo). Every top GM in London seemed to be there. It was so well organized; printed booklets had everyone clearly listed, with table numbers. I was at a fabulous table, with my friends Stephen Dunk of TravelZoo, Alison Gilmore (ILTM) and Nina Gardiner (CUT Communications), and the top celebrity photographer Richard Young who was just about to fly off to New York to celebrate his wedding anniversary at Rosewood‘s The Carlyle. 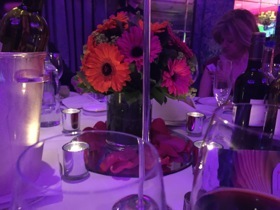 Before eating, Nick Perry announced inaugural ULTRAs events in Dubai and New York, alongside Ultratravel Middle East and US: he is working on television, with JSP Productions, and there will be an Ultratravel Lounge at London’s Telegraph Travel Show, January 2016. Then he announced more awards. Best hotel group was Four Seasons, best golf was Gleneagles, and best hotels, as well as ‘the Burj‘, were Four Seasons New York, for the Americas; Claridge’s London for UK; Four Seasons George V Paris, for Europe; Le Touessrok Mauritius – re-opening November as Shangri-La – for Indian Ocean; The Peninsula Hong Kong for Asia-Pacific. 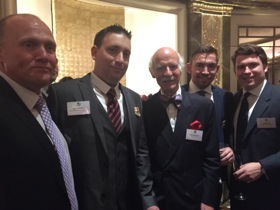 Anton Mosimann with some of the truly amazing heroes

Charlie Starmer-Smith, Travel Editor of all the Telegraph publications, spoke, as did Chris Hartley, CEO of Global Hotel Alliance. There was also an amazing and emotional introduction to Ultratravel’s 2015 charity, Skiing With Heroes.  This was set up in 2012 by Gilly Norton, who organises annual Klosters ski sessions to give physical and moral support to British soldiers wounded in recent wars. The idea is to help them along the route to civilian employment – and, judging by the ten Gilly Norton brought along to help present awards, alongside Charles Dance and such other celebrities as Walking The Nile‘s Levison Wood, they can do anything. I was really impressed by them (they honestly seem ideally suited to the unexpected challenges of working in hotels). Skiing With Heroes relies entire on donations – see its website, to help. 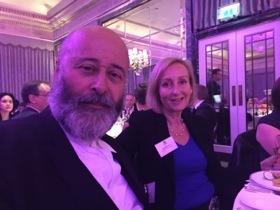 Finally it was time for dinner (we had eaten our canapés during the presentations). This is a luxury hotel that truly understands power banquets, and service was impeccable. Today’s top Dorchester chef is Henry Brosi and the menu tonight was English-English, in the form of Devon Dexter ribeye with tiny Cornish pasties and asparagus and a rich olive jus followed by a millefeuille of Buckingham Palace honey brûlée with raspberries, apple blossom and honey cress. After which I am afraid I did not wait for the post-prandial drinks but hiked five floors up to my lovely room, and bed.