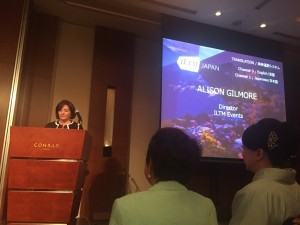 The most successful ILTM Japan – International Luxury Travel Market for the Japanese inbound and outbound market – closed on March 2nd 2016, says the gal. Luxury hotel and other hospitality sellers, from 25 countries, met up with top international and Japanese travel advisors in pre-arranged one-to-one meetings, over 3,000 of them in all (this was more than double 2015’s tally). No wonder Alison Gilmore, Senior Director of ILTM worldwide, was so happy as she opened the event, at the launch Forum. The picture to the left shows, listening to her, American Express‘ top luxury statistician for Japan, and, on the extreme right, the equally brilliant Miwako Date. 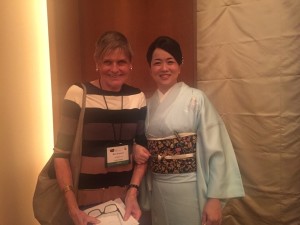 Date-san is CEO of Mori Trust’s Hospitality division, overseeing a total of 32 hotels across Japan. She likes partnering with big management companies: last week she handed five Laforet hotels to Marriott, for re-branding and management, and this Thursday she announced a new-build J.W. Marriott, in Nara. She also works with Starwood, at the Westin Tokyo and the divine boutique Suiran, a Luxury Collection Hotel outside Kyoto. Here in Tokyo she also owns the highly efficient and enjoyable Conrad Tokyo, now the home of ILTM Japan – has there ever been a GM who can be in more places at once than Heinrich Grafe, who runs this hotel? Date-san spoke at the Forum, and also stayed on for the opening party. 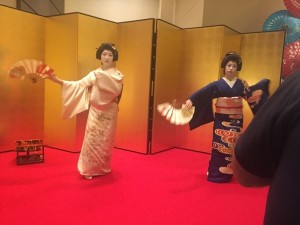 Geishas at the JNTO party

The first night’s party was sponsored by JNTO, who converted the ballroom, with all-wall hangings, into traditional Japan. Yes, there were geishas dancing, and a group of drummers that was easily as good as any I saw on the fascinating Silver Discoverer cruise down Japan’s inland sea and its southern and western islands. But then we jumped up to the 21st century, and one dance routine featured, I think, three people. Why I only say ‘I think’ is that they were completely in black, with LED patterns on their gear. Controlled remotely, these patterns switched from, say, blue hands, to nothing but orange skeletal-body shapes, as the wearers whirled and twirled.

An artist dashed off ILTM’s 2017 logo

Talking of whirling and twirling, one floor section of this luxury hotel became a racing track for Honda’s robot stools – see the video below. And, more whirling and twirling, an amazing artist, at that opening party, almost danced as he used roller-pads and five colours of paint, carefully marked in their tubs, to create this lovely image, above. We all clapped and cheered, and this will be the logo of ILTM Japan 2017 (mark the date, now, February 27th – March 1st, 2016). After that JNTO party, it was a case of getting ready for the morrow, to start those 3,000 business meetings.