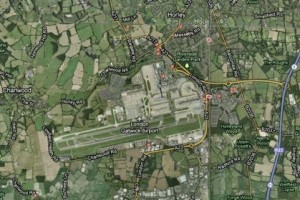 The gal really does not like flying in and out of Gatwick for the sheer inconvenience, geographically, but sometimes it is inevitable. British Airways seems to put far too many of its routes out there, rather than Heathrow. Want Cancun, Malta or Marrakech? Gatwick is your only bet, and remember that Gatwick‘s First Class/Gold Card lounge closes at three, before Marrakech takes off. However, one good thing is that you are far less likely to be delayed, or put into a circle-pattern hold, when flying into Gatwick, and generally you can quickly admire how much green countryside there is before touching down. There are two suitable-luxury hotels connected to terminals, Sofitel to the North Terminal, and Hilton to the South Terminal. 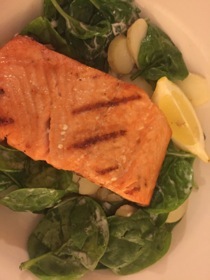 I was invigorated by Hilton London Gatwick‘s attention to healthy eating. I dined in my room, 7436 – on the fourth floor in the new addition, where all rooms start with seven. I was attracted to grilled salmon and fries, with vine tomatoes and a choice of sauce, which I thought good value for £20. Then I turned over the page to find healthy options, which included, guess what, grilled salmon with a salad of sliced new potatoes an raw spinach leaves, tossed in fromage frais, and this was only £18. No points for guessing which I chose, and the result was absolutely delicious. Well done to this hotel, also, for realising that if must have an automatic minibar – despicable in most hotels but just about tolerable in airport hotels, where turnover is so quick – at least, like here, have an empty compartment clearly marked for guests’ own use. 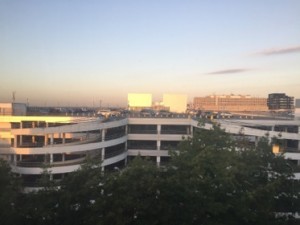 My sense of euphoria continued next morning. There are several sets of internal staircases at this 821-room monster, which provide good exercise (the GM, somewhat amusingly called Guy Hilton, is a marathoner). There is a bijou gym but it is 24/7 and you can generally get on at least one bit of equipment: if not, you can run or power-walk over to the terminal, a good seven minutes each way. Back in my room, I opened the curtains to see the sunrise over South Terminal’s short-term carpark. Even though I am not an anorak-parka plane spotter I do like, when there planes around, to be able to see what is going on, at least up in the air. 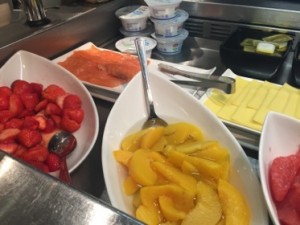 .. and the club lounge’s healthy buffet

Luxury in an airport hotel is the aforementioned interior connection to a terminal. Just as in another favourite airport hotel, Hilton London Heathrow attached to Terminal Four, there are flight monitors and check-in kiosks in the lobby, and everything opens early. In both hotels, clever guests certainly make sure they have access to the club lounge, and, in both hotels, staff are lovely. Here at 6.30 p.m., when the cocktail time opens, it is a metaphorical bunfight, with people helping themselves to enough samosas and chicken wings to make a satisfying, though hardly healthy, evening meal. By contrast, get to breakfast for its 6.30 (a.m.) start and all a healthy traveller can want is there, strawberries, Müller bio yoghurts, really good scrambled egg. And if you want your caffeine, the Carimali machine produces almost as good a brew as my Nespresso by Magimix does, back home.