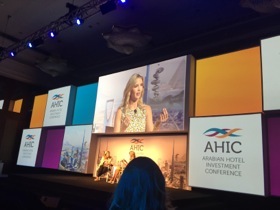 Ivanka Trump was one of the two most glamorous women at the recent Arabian Hotel Investment Conference (AHIC) in Dubai – the other was Lara Ritter, who manages to travel round the world without the private jet that is constantly at Ms Trump‘s disposal, and Lara always looks fab, says the gal. Ivanka was being grilled on stage, by ESPA founder Sue Harmsworth, about luxury and she must have used the phrase ‘attention to detail’ at least 30 times. She also let slip that she and her family just love being in and out of their hotels, which must be a nightmare for the poor people trying to run them. 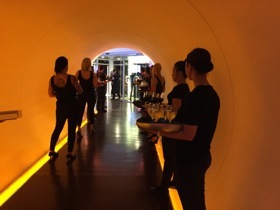 This year the conference, put together by Bench Events‘ Jonathan Worsley and Jennifer Pettinger, and MEED‘s Eddie O’Sullivan and their respective teams, specifically looked at developing hotels for future guests. What do millennials want? The answer is not only casual, service-free. Marriott CEO Arne Sorensen mentioned how he had talked with a 28-year old Chinese man who is addicted to Ritz-Carltons, and has stayed in 18 of them so far. Physical age seems to have nothing to do with a new outlook. Jumeirah took the opportunity on the first night of the conference to invite all 620 delegates to Zero Gravity for a party to introduce the new brand, Venu, a bit more casual than Jumeirah – although some of its hotels, like the divinely family-friendly Jumeirah Beach Hotel, already seem to exhibit zero percent stuffiness. 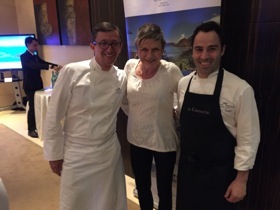 Chefs from Royal Monceau Raffles, Paris, were in town to cook at Raffles Dubai

After days of conferring, and round-tabling, and listening to pundits and panels, there were lots of extracurricular evening events. Royal Monceau Raffles, Paris, sent chefs all the way here, to Raffles Dubai, to cook dinner for a select number of local bigwigs, including a charming couple who run a private jet magazine (they had recently stayed at Royal Monceau Raffles and their young kids were completely besotted by how the hotel knew how to please them – they thought, then, that all hotels gave out balloons and toys that were just right. 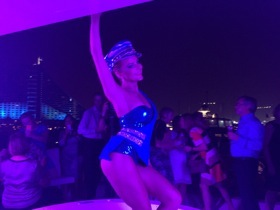 Viceroy’s party on board the Good Ship Azimut

Getting something that is just right is a secret ingredient to making luxury hotels work. Another night that week Viceroy Hotels took over a private yacht that was confusing called Azimut, the name of Russia’s top hotel brand. The party was sensational, with enough Moët to sink a battleship and nautically-attired dancers in the yacht’s jacuzzi, specially filled with ice to hold the rapidly-depleting number of as-yet-unopened bottles. Since AHIC was this year concurrent with the massive Arabian Travel Market ATM everybody who is anybody in travel and the Middle East was in town. Traffic was appalling so when you finally took your shoes off to step on to the Good Ship Viceroy, you heaved a sigh of relief for a toast to the host.