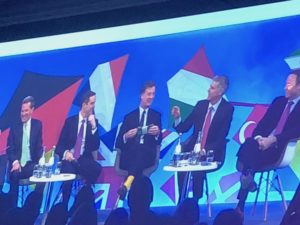 CEOs show off their socks

As every year, luxury hoteliers joined their colleagues, and investors, developers, designers and consultants – and the gal – for the annual International Hotel Investment Forum IHIF, held as always at InterContinental Berlin. Although it started officially March 5th, 2018, more delegates than ever arrived the previous night (perhaps news of 2,300 delegates inspired them to get in early). Now entirely Questex-organised, under that company’s President and CEO Kerry Gumas, and the charming and super-efficient event manager Tess Pearson, it seemed even better and more worthwhile. The dozens of sponsors were led by CBRE. 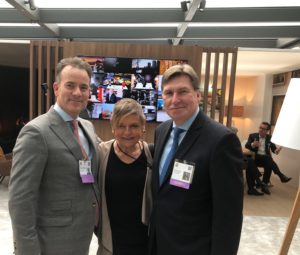 The title ‘Reaching new heights’ was relevant. Despite everything, 2017 saw occupancy generally 8% above the previous summit reached in 2008, and when figures are high hotels can charge more. There were, as always, important main sessions, and dozens of break-outs. The highlight panel on brands, moderated by Deloitte’s Andreas Scriven, was momentarily diverted by Wyndham’s Geoff Ballotti encouraging his fellows to put on the technicolour socks he had brought along – Accor’s Sébastien Bazin was already wearing sunflower socks to balance his cancer-support fuchsia wristwatch. Bazin sees brands as a group of friends, a short cut in a crowded world, and consumers know what to expect. 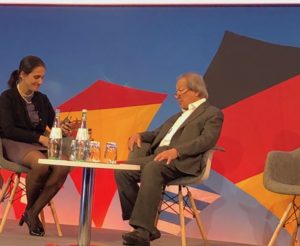 IHG’s Keith Barr let slip an imminent announcement of buying an existing company (the bet is on Regent) – and anticipated soft-brand addition(s) later this year. Chris Nassetta, Hilton, said there are far too many brands but he has too few of them and when he finds white spaces he will go in. What brands, away from hospitality, do these ceos admire? Tesla for innovation and passion, Barr: Chanel, Dior and Hermès for sticking to positioning and purity, Bazin; Southwest Airlines for culture, service and value proposition, Nassetta. Adrian Zecha received the lifetime achievement, and talking with his former colleague Liv Gussing Burgess, now md Luxury Hotel Consulting, he shared his ethos of no operating procedures (given time he could make an idiot set a table but the vital elements are charm and warmth). 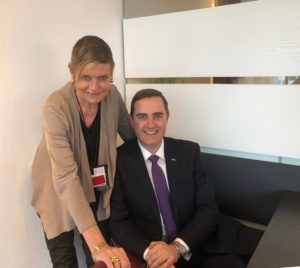 What should all those involved in luxury hotels look out for in future? Savills’ George Nicholas thinks hotels are a great investment (he would put money into London, or Barcelona, Berlin and Madrid. Servotel President/CEO Omer Isvan foresees hotels moving into Airbnb territory with curated houses, not even called hotels – and Room Mate Group’s Kike Sarasola was not alone in saying ‘serviced apartments’. Ennismore’s Sharan Pasricha, of Gleneagles and Hoxton fame, says there will be less tech in bedrooms as guests bring their own. As always, there were lots of parties: the elaborate opening reception, hosted by the newly-named Radisson Hotel Group at Berlin Radisson Blu. They turned it into pre-Wall-come-down event – see Lungarno Hotels’ CEO Valeriano Antonioli, above. And, as always, InterContinental Berlin’s superb eighth floor Club Lounge was where the A-listers gathered – see a video below. I will be back there, for the next IHIF, 4-6 March 2019. NOW SEE VIDEOS OF ADRIAN ZECHA’S SALUTATION, RADISSON’S PARTY, AND THE INTERCONTINENTAL’S CLUB LOUNGE