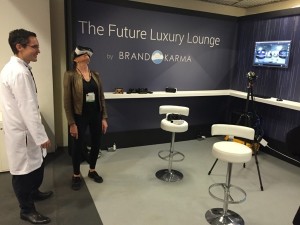 Wearing a VR set, one does sometimes wander round like a zombie

And then, says the gal, the actual show, International Luxury Travel Market ILTM 2015, the mother-ship of all ILTMs, began. Cannes only sees an event on this scale about three times a year, and that includes the Film Festival. This year, ILTM had a staggering roster of 1,458 companies exhibiting. Add to this an equal number of hosted buyers, the world’s top travel advisors (formerly known as travel agents), and you get an impression of the size. The exhibitors stay put, and every 20 minutes another advisor comes for a one-to-one meeting, arranged by computer. There were just over 60,000 such meetings over three days. All the time, too, there are fringe excitements, like a spa salon and, what bliss, a future laboratory. 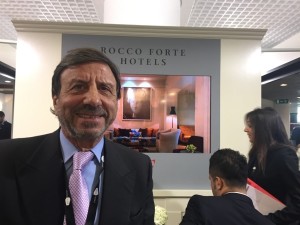 Mario Jobbe and his colleagues from Brand Karma are into virtual reality VR in a big way. Put on one of their pairs of VR goggles, say Samsung Gear VR Innovator Edition for Galaxy S6/S6 Edge, powered by Oculus SM-R321, as shown, and you feel as if you swimming under water, then climbing a mountain, or looking around a hotel room, all 360 degrees. I was acting as if I were six years old again. It was such fun, and it is obviously the future. The clever thing is that if you use the goggles I liked best, Samsung, you merely attach your Samsung smartphone, and they turn whatever app you choose into VR, but obviously it only works with Samsung. This was certainly a break from trekking the halls to find one’s next appointment, but the lovely thing about Cannes is that all the top people come. Even Sir Rocco Forte flew in for 24 hours (he is looking for more Italy hotels, he says). 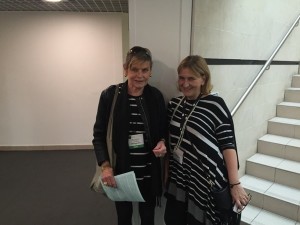 I met lots of new people, made many really good friends, including a near-twin, one day, a brilliant creative woman called Rachel Hayes, who heads Everywhere Brand. I ran into Charles Bourdin, who has started a hotel rooms exchange site, Trading Links. There were top GMs galore, and more than enough CEOs to represent every leading luxury brand (I know the Face Of Raffles was there – where were you, Peter French?, though I did see your colleague Jennifer Fox a couple of times). Hervé Humler hosted a really memorable Ritz-Carlton breakfast; he had flown over the teenager who, three years ago, made such a mind-boggling TED talk, Logan LaPlante (he is now all of 16). Of course as always there were leading luxury media, including Travel+Leisure Editor Nathan Lump and, for online, Luxe Tiffany herself, Tiffany Dowd – I also finally met Johnny Jet, who had his wedding at Trump Toronto. 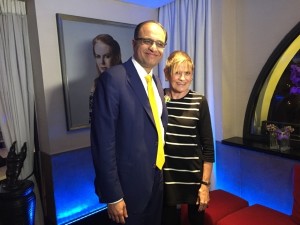 There were parties, lots of them, every night. You had to choose which luxury hotel brand you wanted to support and then, as if shopping in Neiman Marcus in a hurry, chart the most efficient way of getting from A to E via the events in between. President of Oberoi, Kapil Chopra, has not been to Cannes for a couple of years and he flew in with a bang, and hosted a must-wear-a-scarf party atop Five hotel. I rather liked the fact he stood in front of Nicole Kidman at one point.