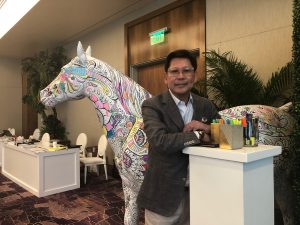 Everyone who is anyone in the luxury hotel business was in Las Vegas for the 31st annual Virtuoso Travel Week, 10-16 August 2019. As always, Virtuoso’s Chairman/CEO Matthew Upchurch – above – appeared cool, calm and completely relaxed throughout, despite having no fewer than 6,515  attendees this year (this represented 25,629 room nights for the three host hotels, the main one, Bellagio, plus Aria and Vdara). The gal managed to get a few minutes both with Upchurch and with Virtuoso’s ever-creative hotels supremo, Albert Herrera, who had conceptualised both his office, on the left, and his Chairman’s elaborate business suite. 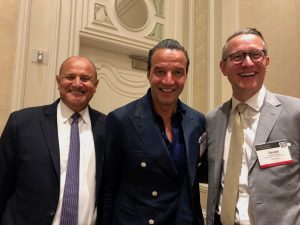 Sadly I arrived too late for Saturday sustainability day, Under One Sky, led by Virtuoso’s sustainability leader Jessica Upchurch, with Costas Christ and Laura Seydell, custodian of her father Ted Turner’s millions of acres of US wilderness. But on the Sunday I started with a lovely outside – poolside – Accor breakfast, hosted by Co-Deputy CEO and Luxury head, Chris Cahill. He also hosted another breakfast on the Monday, when those with coveted invitations heard Boris Johnson’s economic advisor Gerard Lyons proclaim that despite everything the global outlook is not all bad. Turn attention to the region India east to Hawaii, and Istanbul, not in his geographical window, and Urumqi (Xinjiang) will benefit most from China’s forthcoming One Belt One Road. 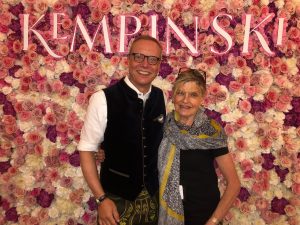 Sunday continued with an eastern Mediterranean Luxury Collection brunch, which somehow once again diverted from its geographical window to include Prince de Galles, Paris, which is celebrating 90 years this year – the hotel’s Gerald Krischek-Cruypelans joined the bosses of Grande Bretagne Athens, Tim Ananiadis, and St Regis Grand, Rome, Giuseppe De Martino, in welcoming long-time travel advisor friends. I then had a lots-of-fun Kempinski Oktoberfest lunch, with beer in big glass tankards: itwas the company’s Munich hotel which took centre stage, thanks to MD Holger Schroth and his culinary team, including Michelin-starred Maike Menzel, 29. And all this, and a media introduction, preceded  the start of the main conference, the Sunday forum, themed for Wanderlist. 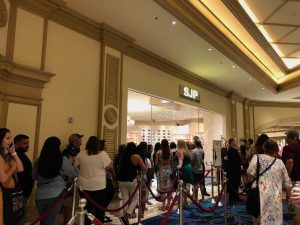 Lines waiting to get into Bellagio’s SJP shoe shop

Over 6,000 heard the charming Chip Conley talking about the new sharing economy, and Matthew Upchurch stressed high-team, emphasis on being human that makes business sense: if dehumanization is growing at an exponential rate, he said, doing business based on trust is an innovation in this time. Well, the Virtuoso Forum closed with a straight-to-the-heart choral big-band, Angel City Chorale from Los Angeles, conducted by a hyperkinetic female who moved as much as any of them (see a video below). Oh what a professional event, as the whole Virtuoso Travel Week turned out to be. On the way out I passed a cordoned-off line of enthusiasts waiting to get in to SJP shoe shop as Sarah Jessica Parker ‘just happened’ to have timed a visit to the luxury Bellagio to coincide with Virtuoso… either she, or her business partner George Malkemus, President USA for Manolo Blahnik, is pretty smart.  Everyone who is anyone knows the value of Virtuoso. SEE A VIDEO OF THE FORUM CHOIR, AND THEN ROOM 26641 IN THE SPA TOWER AT BELLAGIO