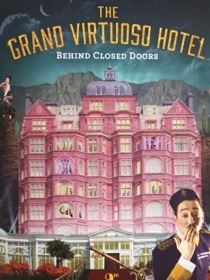 Menu for the hotel awards dinner

The best-of-the-best luxury hotels’ dinner at the 27th Virtuoso Travel Week, held at Bellagio, Las Vegas, August 9-13, 2015, was themed The Grand Virtuoso Hotel, a take-off on Wes Anderson‘s hilarious Grand Budapest Hotel movie, starring Ralph Fiennes. Yes, Virtuoso takes every detail seriously: seven team members spend all year long planning for the next Week. This year had 4,842 attendees from 90 countries – the number includes 2,294 travel advisors. Because of the sheer size, the event has spilled over from main-hotel Bellagio to the neighbouring Vdara, and in 2016 will expand yet further to Aria. Bellagio hosts most of the business meetings, and the big dinners. 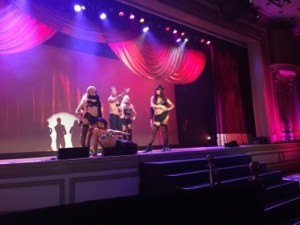 The best-of-the-best hotel dinner was for 1,600, seated in the Grand Ballroom and so planned that there were two stages. Dancers oscillated between a central stage, and the main stage, so that many tables had fantastic views. Like everything here at Virtuoso Travel week, the service was meticulously planned: that night 160 servers were quietly conducted by a banquet manager who fortunately has a degree in communication and understands technology, in that night’s case beepers and radios, which meant no table was without its hotel pageboy hat-shaped chocolate dessert. 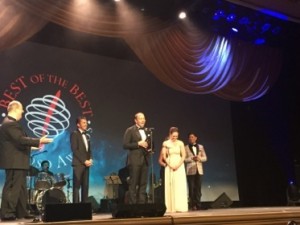 Dolder Grand is honoured for its spa

Award winners fortunately did not have to dance from one stage to another. They merely made the long red-carpet-feel walk from the giant room – you could not see its periphery – to the main stage, to be accoladed by Virtuoso Chairman Matthew Upchurch and his right hand supremo, Albert Herrera, host that night (he made his own entrance hidden inside a rolling closet). As always, Mr Herrera is not only a dapper dresser but also a natural performer. He is also the ultimate professional, a kind of personal concierge to all the 2,294 travel advisors. 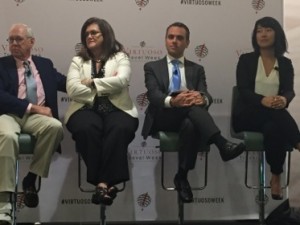 One of the main pointers that evolved from the work that went on, day in and day out, four days’ of four-minute one-to-one meetings from 8am on… How do hotels leave a lasting message in so short a time? Philip Wood makes sure you remember The Jefferson in Washington DC: he shows an image of the hotel’s canine ambassador, a beagle called Monty (Lord Monticello), who has his own business cards. Overall, a main trend is the evolution of multi-generational travel from parents with children, and then add grandparents, on to four-generations travelling together. Luxury hotels have to be prepared. One fascinating panel had specialists in, from left of the image, Mature travellers, Baby boomers, GenX and Millennials. Briefly, Matures can take forever to make up their mind, Boomers may behave as if they are Millennials, GenX does not want to get old and Millennials see travel advisors as personal friends and/but make contact today to say they want to travel tomorrow, four days, ANYwhere but every detail organised.