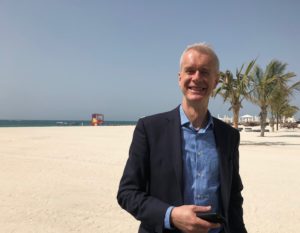 For the first time, the 14th annual Arabian Hotel Investment Conference AHIC – held April 17-19, 2018, moved from one luxury Dubai hotel, complex, Madinat Jumeirah, to a hotel in another Emirate, namely Waldorf Astoria Ras al Khaimah (or at least its beach).  Host partner Ras Al Khaimah Tourism Development Authority built what can best be described as the ultimate air-conditioned tent. Bespoke, it took six weeks to construct and, at 90x30m, was big enough for an auditorium for the 900+ delegates, plus a smaller discussion area, and all support, including food and drink, and an adjacent majlis only used for a multitude of royals on day one. The assembled dignitaries that day included the Ruler of Ras al Khaimah, Sheikh Saud Bin Saqr Al Qasimi. 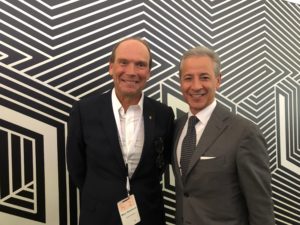 Themed Focus on the Future, relevant sessions included milllennials, when Emaar CEO Olivier Harmisch described his E25 group which continually inputs a younger viewpoint – but why, asked Jonathan Worsley, AHIC founder, and chairman of organiser Bench Events, are millennial brands not already in the region? They will come, said Standard’s Amar Lalvani, but those brands are perhaps slow to realise the potential of the Middle East – although the 25hours group, now partially owned by Accor, will be opening at Dubai’s WT Centre. Also looking ahead, AHIC this year highlighted Ras Al Khaimah for big growth, not only on Marjan Island: the Emirate saw one million tourists in 2017 and is aiming for three million by 2025 but there are currently only 5,500 rooms. 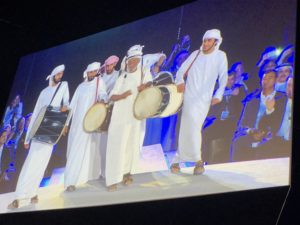 Thank goodness for investment in a superb interviewer, BBC Hard Talk’s Stephen Sackur – he came here direct from interviewing Russia’s foreign minister Sergey Lavrov in Moscow. Sackur was especially good when talking with Emaar’s charismatic Chairman Mohamed Alibbar, and with IHG CEO Keith Barr. He also stirred up an owners’ panel to the extent that RAK Hospitality CEO Yannis Anagnostakis asked why some operators promise a five-star product that turns out to be four-star, and some guests consider three-star (in reply, such operators as Simon Vincent, Hilton, rose to heated defence). Sackur’s final task was to introduce wrap-up speaker, Sir Ranulph Fiennes. 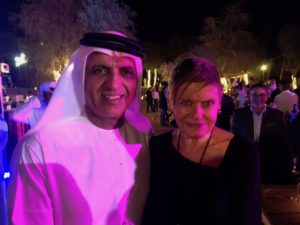 The main area of the tent had a massive exhibition area, and a golf simulator. Waldorf Astoria Ras al Khaimah GM Alan Stocker, who seemed to be on permanent hotel-lobby duty throughout the event, made sure the tent’s ongoing snacks and drinks were always superb.Waldorf Astoria hosted the first night cocktail, but pride of place goes to night two’s desert extravaganza, hosted personally by Marriott President Middle East & Africa Alex Kyriakidis at the recently-rebranded 101-tented pool-villa Ras al-Khaimah Ritz-Carlton Al Wadi (scroll down to the previous Girlahead). And how absolutely admirable that the Ruler himself turned up. AND NOW WALK AROUND THE TENT, AND THEN THE MARRIOTT PARTY