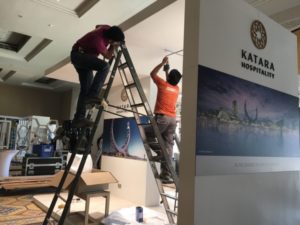 The reason luxury hotels, especially around the Middle East, were temporarily without GMs last week is that so many were in Dubai for two absolutely essential industry events. One is Reed’s Arabian Travel Market (ATM) – the video below must have been shot one second after the doors were opened before tens of thousands of people flocked in. The other, this year concurrent with ATM rather than preceding it, is the Arabian Hotel Investment Conference AHIC, organised by Bench Events (local director Jennifer Pettinger) and MEED. Above, right of the picture, is Jonathan Worsley, Chairman of Bench Events, still smiling as he solves yet another tricky IT hiccup. Around him, AHIC booths were being erected by skilled teams, all in uniform T-shirts. And when they were all up, in between sessions with pundits giving their views, the 637 registered delegates and last-minute sign-ups could wander the booths. 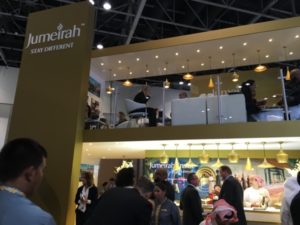 There were also exhibitors, 2,800 of them to be exact, at ATM. Hotel groups are bundled into one hall, a jolly good thing as no stand is numbered so you keep on running into the same people, in my case UltraTravel’s brilliant conceptor and organiser Nick Perry, also going round and round and never finding the one stand where a meeting had been scheduled half an hour ago. Those who have access to the media centre are lucky – it is a great meeting place. For those who want to shorten their lifespan on this earth, smokers’ corners are probably good meeting places. For the rest, it is a case, at ATM, of the tallest stand wins. Jumeirah was among those that really stood out. 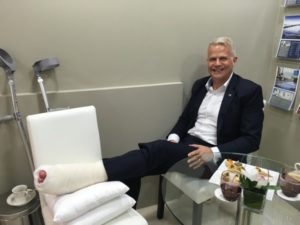 David Thomson, COO of JA Hotels, found himself in a fortunate position. A motorbike accident meant he literally could not be part of the mélée: holed up in the upper floor of his stand, food and drink within easy reach, he knew that anyone who wanted to talk to him had to come to him, whenever. He would have missed out, however, on the excellent evening parties. On one night alone, there were big ATM events at Armani Hotel, at the new Four Seasons International Financial Centre IFC, and at Madinat Jumerah. At the last, greeted by Jumeirah CEO Stefan Leser, well over a thousand guests were wrist-tagged before walking through to the outside arena, with plenty of white seating, great shows flown in from London, masses of drink and, sensibly, easy-to-eat one-bite beef or vegetarian burgers. 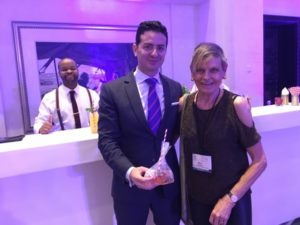 Azar Saliba with drink in a bag

Cleverly, at the same time Madinat Jumeirah top chef Dirk Haltenhof was also catering the official opening AHIC party, inside in Mina A’Salam ballroom. Here another thousand, welcomed by Stefan Leser’s predecessor Gerald Lawless and Jumeirah COO Robert Swade, swanned over black and white tiled floors and specially-laid navy carpets to peruse amazing buffets (gosh the cubes of parmesan were good). On the drinks side, the mixologists were being imaginative. One cocktail was presented in a plastic bag, tied with an elastic band. Was I about to drink a goldfish, I was asked? Following the old adage that all work and no play is not good for anyone, seriously-important professional events in Dubai April 25-28, 2016, did manage to insert some enjoyment into the business happenings.