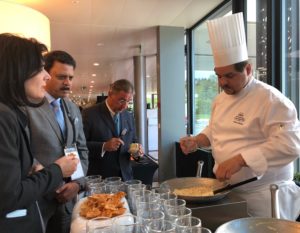 Bugs in your risotto sir?

And so… the gal was lucky enough to join 115 others looking ahead into the exciting ongoing world of luxury hotels, plus restaurants and hospitality in general.  This was the second biennial Window 2 the Future, at Lausanne EHL on Monday April 30th, 2018, organised by Lausanne Hospitality Consulting (LHC), a subsidiary of Ecole hôtelière de Lausanne EHL and the Swiss Hotel Association.  There were some noteworthy adjunct forecasts – the excellent buffet lunch, for instance, included made-just-for-you risotto, flavoured with bugs (it went extremely well with a glass of bubbles, from sponsor Champagne Laurent-Perrier). More mainstream was the realisation that no-one can predict ten, 20 or 30 years and, realistically, to get a message through to consumers, a two-minute YouTube is now the maximum. 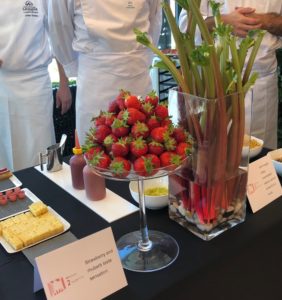 Some things will never change (see lunchtime’s enticing dessert corner, on the right). High touch will always be as vital as ever, regardless of the impact of high-tech. The day was led by LHC CEO, Yeti Sinh, and opened by his chairman, Ernst Brugger, who launched the ongoing high-tech v high-touch debate. High-tech needs to eliminate annoyances, say wasting time, and to cut the gap between anticipation and realisation. Will high-tech eliminate human functions? It is difficult to say which hotel jobs will be needed in future but the crux is to attract the curious, and encourage lifetime professional and personal learning. Neuroscientist Tej Tadi, founding CEO MindMaze – whose investors include Leonardo DiCaprio – was among those welcoming VR as a way, like wine, of tasting the product. 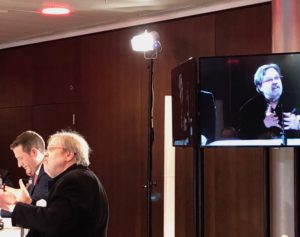 Leading Hotels of the World (LHW) CEO Ted Teng is in his element in open, and combative, debate, and here he wondered why hotels tend to use high-tech to do the same things better rather than innovate – how can we allow a digital room service menu to let you delete certain ingredients in a dish? Non-virtual innovation, in another session, came from Philippe Perianin, Nestlé Purina, describing the rise of pet care – Orascom’s CEO Samih Sawiris said he initially laughed when someone wanted to do a pet hotel, for pets and parents (=owners) at El Gouna but, now it is up and running, it is ‘highly profitable’ and more will follow.  Sustainability and community involvement came up continually, and Serena’s Islamabad-based CEO Asia, Aziz Boolani explained how, in all his eight Pakistan hotels, working with local groups to stimulate arts and education, handicrafts and sports, is paramount to the overall business plan. 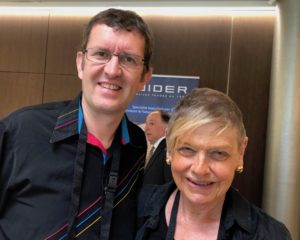 There were so many memorable moments. IOC Executive Director Christophe Dubi said Los Angeles’ forthcoming ‘smart stadium’, for that city’s 2026 Olympics, will cost $2.5 billion and come with a range of built-in dining and retail opportunities and ample WiFi for everyone.  The debate on gastronomy included culinary heavyweights Peter Rebeiz of Caviar House, Philipp Mosimann (already working on the Tokyo Olympics) and global conceptor Patrick Willis.  Final presentation was from Swiss environmentalist Louis Palmer, who had brought along the actual solar-panelled car that he personally built, and then drove around the world. Unrelated thought: to date I have only come across one luxury hotel that can say it is in some way connected to a fleet of solar-powered vehicles, and that is Taj Lake Palace, Udaipur… AND NOW SEE THE OPENING OF WINDOW 2 THE FUTURE, AND THEN IOC DIRECTOR CHRISTOPHE DUBI TALKING