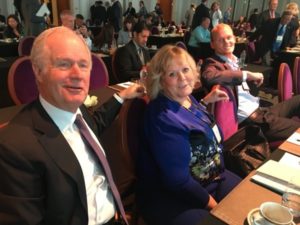 The biennial gathering of Preferred Hotels & Resorts convened this very Wednesday, October 12th, 2016, at Palazzo Versace, Dubai – and what a suitable spot (four years ago was The Leela Palace Delhi, two years ago it was Pebble Beach in California, and now here, the Emirate’s latest opulent hotel, with crystal toothmugs and Versace designs for everything from bedspreads to breakfast waiters’ shirts). That first night there was an outside opening cocktail, for the 180 delegates, who included CEOs, and owners, say Walter Hickel Jr, whose father built the Captain Cook hotel in Anchorage over 50 years ago. Thursday then started, sharp at nine, with an introduction to Dubai – see one of the skyline shots, above. As always, says the gal, the Ueberroth family, the passionate professionals who are the heart and soul of the company, are here in strong evidence. 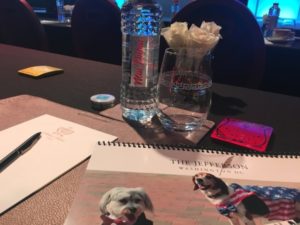 They sat in the front row, indeed, of the conference room, father John Ueberroth, whose enormously wide experience includes Ask Mr Foster; mother Gail Ueberroth, one of the world’s two most famous flight attendant alumni, the other being the mother of The Duchess of Cambridge; and their children Lindsey Ueberroth, President and CEO of Preferred, and Casey (he is Chief Marketing Officer). This was definitely a luxury gathering. Where else had breakfast coffee been poured by enthusiastic youngsters in green-floral Versace shirts into Versace-decorated Rosenthal cups? Where else does the ballroom, where we met for the nine a.m. business start, have plush carpeting based on Versace scarf designs, and each place setting, at the navy fabric-covered tables, had cut-glass glasses, fresh rosebuds, and really tasty Mint Mints (loved the pomegranate acai flavour). 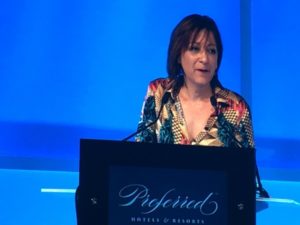 The opening speech was a welcome from the very-Australian GM of the 215-room Palazzo Versace Dubai, Sandra Tikal. She willingly shared that she had actually been involved with this hotel project from its 2005 start, under Emirates Sunland, but then it was mothballed – READ HER REMINISCENES, BELOW. Now the hotel, right at creek-side in Culture Village, is owned by ENSHAA, chaired by Sheikh Tariq Bin Faisal Al Qassimi of Sharjah and, with a team that seems to be heavily from China, it is obvious Sandra Tikal has put a lot of emphasis on training (my desk light started flickering, I called down and an electrician from Nepal, who had last worked on Qatar’s Banana Island, arrived in five minutes, and reprogrammed my room). 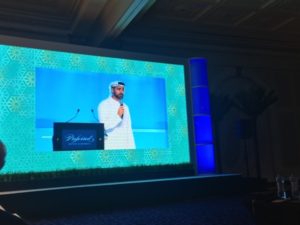 The conference was themed Dubai By Design and there were two related talks. The charismatic Issam Kazim, CEO of Dubai Corporation for Tourism & Commerce Marketing DCTCM, who seemed to glide rather than walk rather round the stage, owning the audience every second of his presentation. Yes, Dubai is building itself as a multigenerational destination, putting in pillars to take tourism numbers up to the planned 20 million by 2020 (he was such a good speaker that I wondered how he learned theatrical presentation during his AMP course at University of Navarra’s IESE Business School). Also, entirely relevant to the subject for this forum for leaders of luxury hotels was the talk by Tommy Weir, founder of the Emerging Markets Leadership Centre EMLC, with a certain resemblance to Woody Allen. He teaches at Hult International Business School, which has a campus in Dubai. He brilliantly explained why Dubai, motivated by its leaders, soars ahead, overcoming any challenge or hiccup. For more coverage, watch this space – MEANWHILE, WATCH SANDRA TIKAL’S SPEECH, BELOW