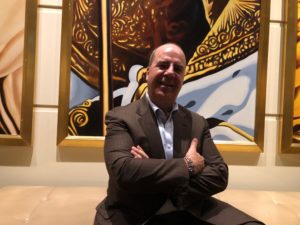 The world of luxury hotels was magnificently represented in Melbourne for the annual Virtuoso Symposium, May 7-10, 2019.  Many of the 508 delegates had come a long way, and most used the opportunity to see more of Australia (Boston Harbor Hotel GM Stephen Johnston, who had to fly home early, still said it was well worth flying 23 hours and 10 minutes, with a transit in Los Angeles, for just a couple of days).  As always, Virtuoso Chairman/CEO Matthew Upchurch was in his usual charismatic form – he loves Australia, considers himself an honorary friend of the country. He told that story again and again during the week, which was most appropriate since story-telling was the main Symposium theme. 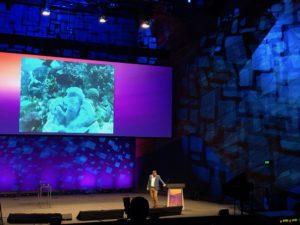 Presentation on the Great Barrier Reef

Educationals included real-time videos showing Townsville QLD environmentalist Craig McGrogan underwater at the Great Barrier Reef, talking to founder of Earth Hour Andy Ridley, in the conference room. New York-based futurist Fred Dust spoke of today’s tensions, which include the ongoing conflict between big data and human insight.  Later, Dust led a fascinating detective-type workshop guessing the identity of someone only identified by images they had posted on Instagram and, since the room was full of travel people, where would you send them on a long-weekend vacation? interestingly one of the ‘hidden personalities’ was none other than Fred Dust, though some participating teams identified that person as female, or transgender, and what were a line-up of Wellington boots doing? Answer: he has a working farm in upstate New York and keeps a variety of boots for weekend houseguests. 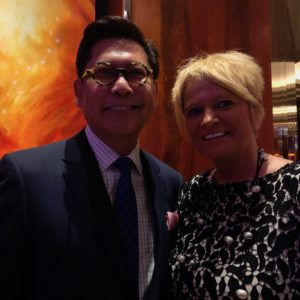 At another session, Rosewood’s Thuy Tranthi Rieder shared some branding secrets on a panel with eco-fashionista Angel Chang (this panel was hosted by Virtuoso’s SVP Global Product Partnerships Albert Herrera). As should now be obvious, the Symposium was certainly work, but it was fun, with lots of laughs. Cleverly, one day was design-your-own. Some opted to visit kangaroos and wallabies, others for Yarra Valley wine-tastings, or golf here, cycling or highways and byways there.  As luck would have it, that was the one day when Zeus, the Greek god ofrain, thunder, lightning, clouds and wind, decreed there should be rain, nonstop, but it certainly brought out the trooper mentality of the travel industry, and helped with yet more networking – the programme organisers had built in lots of that..  The openng cocktail, at the National Gallery of Victoria, was hosted by the outgoing MD Tourism Australia John O’Sullivan and the equally-approachable Peter Bingeman, COO Visit Victoria – I nibbled Moreton Bay Bugs (thenus crayfish) and looked at such living-art Australian images as a lifesaver (see photo above). 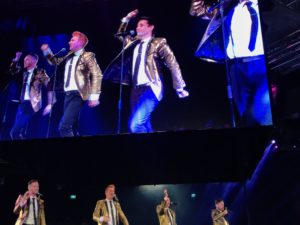 A really nice feature was the dine-around, being bussed to some of Melbourne’s best restaurants – I was lucky enough to be allocated Scott Pickett’s barbeque food at Matilda 159.  The two host hotels, Crown Towers and Park Hyatt, entertained magnificently.  Park Hyatt’s superb cocktail included the actual Australian Open tennis and Melbourne Cup horse-racing trophies, for selfies if you donned white gloves. Crown’s wrap-up dinner had place settings individually projected from the ceiling, really decent food and top entertainment in the form of emerald-clad diva Kerrie-Ann Greenland (from Instinctmusic) followed by the motown-type Oz Boyz quartet. Matthew Upchurch presented the Ruby of Siam award to Stephanie Anevich, from Vision Travel in Australia. Also at the dinner, Anthony Goldman, one of the brothers who current head the Goldman Group, which has main offices in both Melbourne and Sydney, formally launched a bespoke Virtuoso gin, blended and distilled at Healesville VIC’s Four Pillars Distillery. And everyone danced and the networking continued.  Whatever Virtuoso does it does with style, in this case sharing the story of Australia’s authenticity, and even those who had travelled from the other side of the world considered it well worthwhile.  As Susanne Hatje, GM of Mandarin Oriental New York, said on her return home, “a Virtuoso Symposium shows the tremendous value that comes from relationship building and forging and sustaining those relationships through human connections. Building these valuable connections doesn’t have a geographic boundary and it’s important to take that initiative globally”. VIDEOS BELOW SHOW, IN ORDER, ROOM 1204 AT CROWN TOWERS, THE OPENING SINGER AT CROWN’S VIRTUOSO EVENING AND, ALSO THAT NIGHT, ANTHONY GOLDMAN’S VIDEO PRESENTATION OF THE DISTILLATION OF THE BESPOKE VIRTUOSO GIN