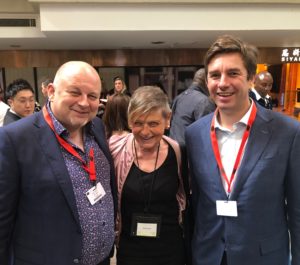 There was a compelling reason to be in Shanghai for the week around November 1st, 2018.  This was the inaugural International Luxury Travel Market ILTM China. Yes, there had been ILTMs in Shanghai for years, but as of this year IlTM split China from the rest of Asia.  ILTM Asia Pacific is, therefore, now well established in Singapore, and it looks as if, from this first Sino-centric show, that ILTM China will also go from strength to strength.  This is the show, says ILTM’s person-in-charge, Andy Ventris, purely for those luxury hotels, resorts, cruise and shopping companies (all called ‘suppliers’) that want to attract the China outbound market. And to get through to the right consumers, ILTM brought along an equal number of ‘buyers’, China-based travel concierges and top-end advisors. 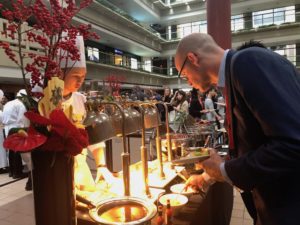 One station at the post-Forum lunch

This first show attracted 215 suppliers from 44 countries, and there were 205 buyers, from China’s level-one cities – matched by computer, this resulted in over 10,000 one-to-one meetings over the 2.5 days of the show. First, as always in the ILTM format, was the Forum, which was honestly one of the most relevant of any ILTM event I have ever attended.  Iris Zhu – see her above – was emcee.  Hurun Report founder Rupert Hoogewerf gave his usual update.  For the first time, it is not all rosy. 20% of Ultra High Net Worth Individuals in China have dropped from his ‘list’ in the last year, but with 130 million total (luxury and otherwise) outbound travellers in 2017 that still leaves a lot of young millionaires. They are, it seems, travelling in smaller groups, probably about five, and they like to go somewhere they have not been before.  Culture is becoming increasingly important. 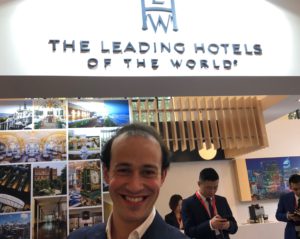 Next speaker was Reuter Founder/CEO Chloé Reuter, whose Luxury Conversation initiative, started at the request of ILTM, looks at Chinese younger-generation millionaires who are now having children.  Travelling with kids has opened up an entire new market. These young parents are swayed in choice of hotel by its kids’ club, which should ideally have organic food. They want space, and nature, for their offspring.  Following this was a panel, with both previous speakers plus Sophia Ong, GM Strategic Partnership & Key Accounts at Tencent, and 28-year old whiz-kid Tony Zhao, who left running Abercrombie & Kent China to be Director of Product, Zhixing Lux designer travel. 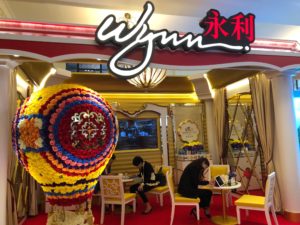 And then, as it always does, Portman Ritz-Carlton Shanghai threw a splendid buffet lunch, which included stations offering Pekin duck, or dimsum, or western food.  There were to be other amazing parties, too.  At the opening night cocktail, up on the 26th floor of The PuLi, it was oysters, or more, and freeflow Champagne. The next night, and the closing cocktail, were both back at Portman Ritz-Carlton Shanghai. Day-long, however, it was meetings, meetings, meetings (as Trump Hotels’ Patricia Tang said, she had really been meeting the calibre of buyer she wanted, the individual travel designer who was seriously interested in ‘buying’).  I already have the next ILTM China in my diary: 31 October to 1st November, 2019.