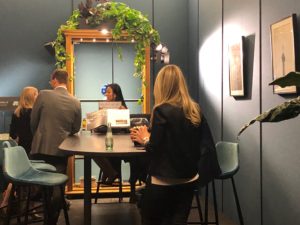 This year’s International Hotel Investment Forum, IHIF, saw 2,400 delegates, and as always Hotel InterContinental Berlin, under always-present GM Aernout De Jong, did an outstanding job. For the two nights of Monday and Tuesday, March 4th and 5th, the 585 rooms were 100%, mostly single occupancy (the eighth floor Club lounge is actually IHIF’s nerve centre). The hotel’s F&B team catered Monday’s traditional welcome cocktail, and memorable Tuesday lunch with dishes publicly plated from moving conveyor belts: that evening, the IHIF gala had stands for each of IHG’s brands, and, the finale, Wednesday lunch, seated, with plated food. Meanwhile, IHIF, now owned and organised by Questex, had more exhibition stands than ever. Standing out from enormously elaborate and expensive displays from Hilton and Marriott, as well as IHG, were less expensive but oh-so stylish presentations from, say, Rosewood. 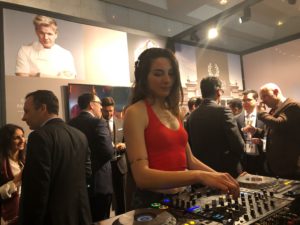 And what a relief that Hilton, and GOCO, offered quick massages, above. Caesars added a bit of jazz and a DJ (with Gordon Ramsay on the way behind) which enlivened sessions full of investment types in dark suits (it must be said that an increasing number merely network around stands and in quiet corners, never entering plenary or break-outs). Lead roles on stage, however, were played by Sébastien Bazin, talking with Expedia president/ceo Mark Okerstrom (‘we’re not fighting any more, our relationship is adult and sophisticated’). Starwood Capital’s md/head international hotels Cody Bradshaw said that by forming The Principal Hotel Company, an evolution of De Vere, Four Pillars and Principal Hayley, results including annual saving over £5 million through headquarters synergies. 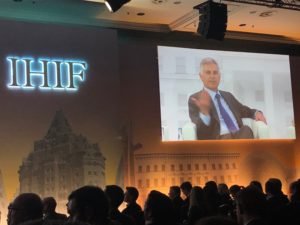 Marriott’s head Europe Liam Brown, who tried valiantly to remember all his 30 brands, still only has 18 brands in Europe so there is lots of opportunity (he says Bonvoy, the new loyalty programme, is already its ‘biggest’ brand). Colliers’ Marc Finney cited Georgia for investment return. On where to expand, Blackstone is checking on locations where technology and Millennial demand are hot. Starwood Capital wants property it can fix. Hilton’s Chris Nassetta pointed out that hotels are susceptible to commoditisation, especially if you dumb down and cut costs – separately, Asset management took a starring role. Amaris’ John Brennan said this discipline should be in from any development start, and at all times it helps to be able to benchmark within a family (his managers are all inhouse, and incentivised). 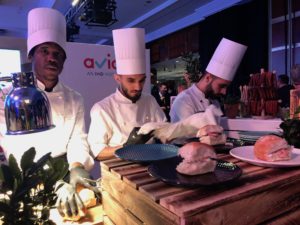 Talking of families, Accor grew its portfolio by two additional members – Accor’s Sébastien Bazin was, apart from his one appearance on the IHIF stage, holding court across the road, at the Pullman, and, on the Monday evening, at Sofitel Berlin Kurfuerstendamm hotel. On both occasions he introduced Tribe, a Melbourne-based lifestyle brand conceived and owned by Melissa Peters, and the following day sbe, which is 50% owned by Accor, announced its new The House of Originals brand. Meanwhile, back at the show, talks and panel discussions and break-outs continued. As always, there were plenty of awards. Sol Kerzner’s lifetime accolade was accepted by his daughter Chantal. Cody Bradshaw received the HAMA asset manager award – Brian Kauman made a polished acceptance speech as young leader. Next IHIF, 2-4 March 2020. AND NOW SEE SEBASTIEN BAZIN SPEAKING, AND THE TUNA DEMONSTRATION AT THE SPECTACULAR ACCOR EVENING